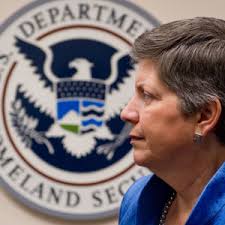 On June 15, 2012, Obama took an unconstitutional executive action in announcing a “shift in policy”.  The new policy directed the Department of Homeland Security to stop the deportation of one million illegal aliens who would fall under the criteria embodied in the so called Dream Act, said legislation having previously failed to make it to a vote in the US Congress.  Department of Homeland Security Czar in Charge, Janet Napolitano, then sent a memo to ICE directing it’s agents to cease arresting any illegals appearing to fall under the criteria of the so called Dream Act.

When these outrageous acts fell under the scrutiny of the people, the only response from the insurgent in the White House was that any criminals falling under the criteria would be exempt from the amnesty.  Now in the past week we have seen these criminal individuals released onto our streets as a part of the so called sequester cuts.

Maintaining our nation’s sovereignty and securing our borders is one of the few true charges we the people have employed our government to achieve.  The House and Senate were to formulate and legislate the necessary laws to accomplish the task and the Executive was to implement and enforce the laws, designed to protect our nation and our people.  But as we all know, the absolute opposite is what is occurring.

We watch daily as the soviet insurgency occupying our government flatly refuse to enforce our laws on foreigners as we the people are evermore accosted by draconian, unconstitutional, treasonous dictates, designed to take control of literally aspect of our lives, from prohibitions on the production and consumption of raw milk to the proposed confiscations of our liberty arms.  And these two facets of opposite realities are congruent to one another, as they are both essential to the eventual displacement of the American nationals by nationals from third world countries around the planet.

There is not one of our laws that the insurgents cannot refuse to enforce and if we the people step up to enforce the law we are named as enemies to the United States and are expeditiously dealt with in the harshest of manners.

At what point do we declare ourselves apart from the delusion and admit that we are under an invasion and that our power structure is infiltrated at every level?  This is an undisputable fact, emphasized in the filing of the lawsuit by ICE Agents against the Obama Administration for not allowing the agents to do their jobs in enforcing United States law, which again, is what we the people charge the Executive Branch of government with doing.  Any act in the contrary being absolutely void of the consent of we the people who are the authority.

Thousands more foreign criminals are scheduled for release this week onto the streets of America.  This is yet a furtherance of an act of treason with a total disregard for the US nationals it will affect.  We might as well face it, either we the people drive these insurgents out of our country, or our future will be not but slavery.