Obama has a Parasitic Lesbian Worm named after him! 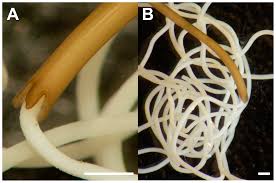 THE OBAMA WORM IS A PARASITIC LESBIAN WORM THAT CAUSES THEIR HOST TO COMMIT SUICIDE.  So life is just as strange as American Politics!

Sex is one of the great mysteries of evolutionary biology – why do organisms have it? It has numerous costs associated with it, including the two big ones, which are that only half the population will produce offspring in the next generation (technically really a problem more of anisogamy than sex, per se) and that successful gene combinations can be broken up via recombination. There are other costs as well. For instance, finding and wooing mates can be costly to an organism.

Nematomorphs, sometimes called hairworms, are parasites that live inside arthropods as larvae, but then exist as free-living aquatic adults. They often induce suicide in their insect hosts, by causing them to jump into water, where the worms then escape (see this previous post for another example). The adults typically seek out the opposite sex and can form “Gordian knots” of mating worms. Today’s species, however, is found in larger and faster-moving waters – and in these big, complicated habitats, finding a suitable mate can be really tricky. So, today’s parasite, has solved this problem through the evolution of parthenogenesis.

Meet Paragordius obamai, (named after President Obama, in honor of it being discovered in Kenya, where his father was raised), a species of nematomorph that has completely given up on males. When brought into the lab, P. obamai only released female worms and nowhere inside these stringy parasites could male reproductive organs be found. Because bacterial symbionts can sometimes produce severe sex-ratio biases or even male-killing in insects and other invertebrates, the authors used pyrosequencing to look for evidence of these micro-manipulators, yet found no sequences similar to the taxa that have been observed to cause these biases in other hosts.

The authors now plan to use this new species, in comparison with a sexual congener, to test hypotheses on the evolution of and genetic mechanisms responsible for this novel parthenogenetic situation.