Obama Just the Wrap Up? 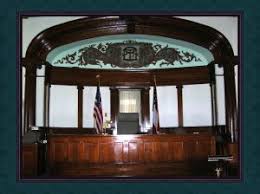 A recent discovery by a private citizen after being railroaded in a Kangaroo Superior Court on a fraudulent and completely bogus foreclosure has revealed a dire situation in the State of Georgia. Further investigations are revealing that this situation is likely the case in all 50 states.

While researching Georgia law in preparation for filing an appeal on an unlawful court decision, John Reynolds, a private citizen of Georgia stumbled across the plain language in the Georgia codes, Title 45 Public Officers and Employees, Chapter 3 – Article 1, regarding the oaths of office required by law of “all persons who are employed by and are on the payroll of the state and are the recipients of wages, per diem or salary of the state or its departments and agencies…” (§ 45-3-11).

The language of § 45-3-12 reads as follows: “The loyalty oath required by Code Section 45-3-11, this Code section, and Code Sections 45-3-13 to 45-3-15 shall apply to all elected officers of this state, including the Governor, constitutional officers, elected officials of any political subdivision of the government of Georgia, and local school board officials.”

The next section, § 45-3-13 Form of Oath, reads as follows: The oath prescribed in Code Section 45-3-11 shall be in the following form:  “I_________(Name) a citizen of __________ and being an employee of ____________ and the recipient of public funds for services rendered as such employee, do hereby solemnly swear and affirm that I will support the Constitution of the United States and the Constitution of Georgia, and that I am not a member of the Communist Party.”

Mr. Reynolds, after reading the requirements under Georgia law on the loyalty oath went to the Monroe County probate court clerk and obtained certified copies of the oath of office and the loyalty oath of Judge Thomas H. Wilson, the Superior Court Judge who had presided over the unlawful foreclosure of his property. When comparing the loyalty oath Judge Wilson had sworn to and reading it over many times, he realized that there was something glaringly missing….

As you now clearly read above, the law expressly requires that “,I am not a member of the Communist Party.” to be included at the end of the Loyalty Oath and it is nowhere to be seen in the oath the not so honorable judge swore to. What does this mean?

Well for starters it means that all cases presided over by this judge since being unlawfully sworn in are null and void as he was not and is not a duly sworn officer of the court, public employee or elected official including the fraudulent foreclosure he was complicit in which prompted Mr. Reynolds to do the research which led him to this discovery. Even if his oath is retaken now and the omission corrected it is impossible to unring a bell and cannot correct what has already taken place. It also means that the illegal judge has no immunity for his acting under color of law from the bench.

Mr. Reynolds promptly filed suit against the judge in the Monroe County Superior Court on March 20, 2013, case number 2013-cv-167. At last inquiry the clerk has not docketed the case which in itself is a felony violation of her own oath of office.

Meanwhile Mr. Reynolds has enlisted help from friends and acquaintances around the state including this author to investigate the loyalty oaths of other judges and state office holders in other counties and the Capital. So far, not one lawful Loyalty Oath has been found, they are all illegal as they all are missing the required language regarding the Communist party. It appears the Communist party has completely taken over the state of Georgia and it also appears that the State of Georgia HAS NO DULY SWORN GOVERNMENT from bottom to top! This would certainly explain why our state is so willingly complying with UN Agenda 21, does not listen to the people and seems to take its marching orders from the current anti-American administration.

It was only a few days after Mr. Reynolds filed his suit that Judge Wilson telephoned the attorney that had represented him in the foreclosure case to protest the suit and insisted the case be dismissed. The attorney was not involved with Mr. Reynolds suit as Mr. Reynolds filed it under pro se status and is representing himself without counsel. A couple days after that the Georgia Attorney General’s office repeated the effort; first contacting the attorney who is not involved and then Mr. Reynolds himself.  Mr. Reynolds was told by the AG’s office that the case would be dismissed because the judge had immunity. Mr. Reynolds pointed out that since he is not a duly sworn judge, there is no such immunity and again refused to dismiss the case. The Attorney General’s office threatened Mr. Reynolds and stated if he did not dismiss the case he would be sued under § 915-14 for any and all attorneys fee’s and costs in the defense of the suit against the judge.

Mr. Reynolds had filed the necessary paperwork with the court to stop any further actions on the foreclosure and informed his County Sheriff that he had done so. Judge Wilson was fully aware of the fact but on March 28, 2013 he attempted to retaliate against Mr. Reynolds by sending Sheriff’s Deputies and a lock smith to remove Mr. Reynolds and his wife from their property illegally. The recently elected Sheriff, Mr. Brad White, a Constitutional Sheriff, had not been informed when his deputies were sent to Mr. Reynolds property but when Mr. Reynolds called the Sheriff and handed the phone to the deputy, the theft was stopped.

It would seem on its face to be a simple case of yet another unlawful and fraudulent foreclosure aided by the corrupt Superior Court system but this is of far greater import. First, there are as yet no legally sworn judges to preside over the case Mr. Reynolds has brought but of far greater concern is the fact that so far no other public official has been shown to be legally sworn either. After the attempt to terrorize Mr. Reynolds and his wife yesterday this author shared the information nationally including internet news sites and Georgia representatives in Congress. Soon after emails began coming in from other states informing her of identical situations. One notable instance of this situation of Communist takeover came from Alameda County California. Yes that is the same county in California which has been on the news this past week in regard to a County Commissioner who is due to retire with a pension paid by the local tax payers in excess of $470,000.00 per year for the rest of her life…. Hmmm with an illegal oath of office does anybody think that pension is collectible?

Another researcher has indicated that this identical situation we have in our great state has been established in ALL 50 STATES! Americans across the country need to visit their local probate court clerk and obtain copies of the Oath of Office, Loyalty Oath and Surety Bond of at least one judge in that court and if they are in the correct county by all means procure the same on the Governor, State Attorney General and County Commissioners. Remember UN Agenda 21 has been implemented through regional planning commissions which are intended to REPLACE and do away with the office of County Sheriff, the highest law in the land!

I urge all citizens of Georgia to inform their County Sheriff so that he or she can take immediate steps to correct the error of their oaths as they are most likely not even aware of what has been done to them.  The County Sheriff is the first line of defense for the people and we the people must protect them in order for them to protect us.

Is the current D.C. Administration just the final wrap up of the long planned Communist takeover of our beloved country? I have only just touched the surface of the ramifications of this issue and I leave it to the people of Georgia to contemplate the rest of it. Look in the mirror fellow Georgians, YOU ARE THE ANSWER!