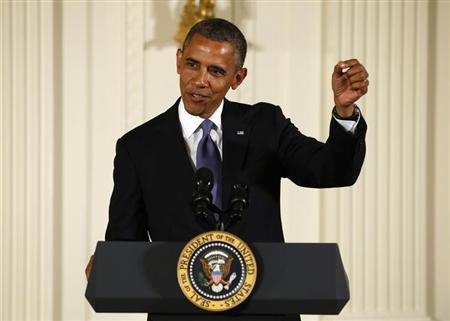 President Barack Obama said on Tuesday that New York City Police Commissioner Ray Kelly would be “very well-qualified” to lead the Department of Homeland Security, but added that there would be numerous strong candidates for the job.

Homeland Security Secretary Janet Napolitano has announced she is stepping down to lead the University of California.

“Mr. Kelly might be very happy where he is, but if he’s not, I’d want to know about it,” the president said in an interview with Univision’s New York affiliate. “Because, you know, obviously he’d be very well-qualified for the job.”

Napolitano has been an outspoken advocate of immigration reform, a legislative priority in Obama’s second term. Despite early momentum, the legislation appears stalled in the House of Representatives and the president said on Tuesday he does not expect Congress to finish work on it before its August recess.

Kelly’s name has surfaced as a possible replacement for Napolitano in part because his strong law-and-order reputation could help neutralize criticism by conservatives who oppose immigration reform over border security concerns.

The department’s broad mandate includes border security and disaster response. The administrator of the Federal Emergency Management Agency, Craig Fugate, praised for turning the agency around after a much-criticized response to Hurricane Katrina in 2005, is also considered a possible candidate.

“It’s one of the toughest jobs in Washington,” the president said. “But, you know, we’re going to have a bunch of strong candidates.”