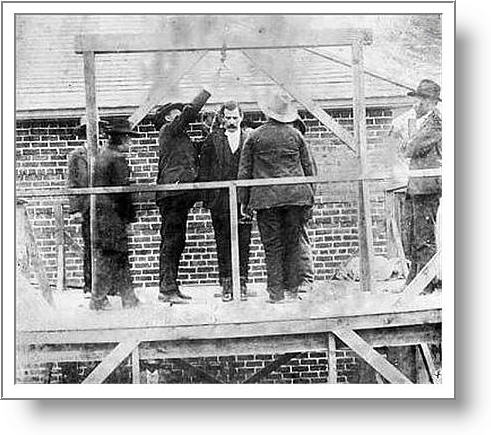 No matter what side of the political fence you’re on, THIS is funny and very telling! It just all depends on how you look at the same things. It is probably made up, but it is not far from the way politicians really do spin the facts.Judy Rudd an amateur genealogy researcher in south east Queensland , was doing some personal work on her own family tree. She discovered that ex-Prime Minister Kevin Rudd’s great-great uncle,

Remus Rudd, was hanged for horse stealing and train robbery in Melbourne in 1889. Both Judy and Kevin Rudd share this common ancestor.

The only known photograph of Remus shows him standing on the gallows at the Melbourne Jail.

On the back of the picture Judy obtained during her research is this inscription:

Caught by Victoria Police Force, convicted and hanged in 1889.’ 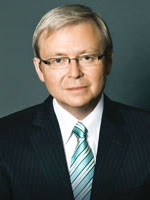 Believe it or not, Kevin Rudd’s staff sent back the following biographical sketch for her genealogy research:

“Remus Rudd was famous in Victoria during the mid to late 1800s. His business empire grew to include acquisition of valuable equestrian assets and intimate dealings with the Melbourne-Geelong Railroad..

Beginning in 1883, he devoted several years of his life to government service, finally taking leave to resume his dealings with the railroad.

In 1887, he was a key player in a vital investigation run by the Victoria Police Force. In 1889, Remus passed away during an important civic function held in his honour when the platform upon which he was standing collapsed.”