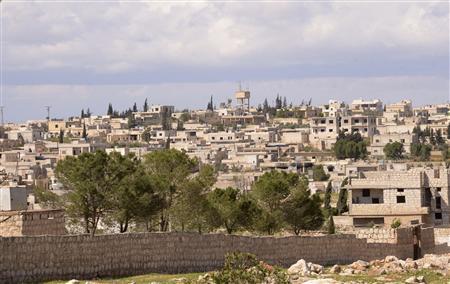 Brigadier-General Itai Brun made the comments at a Tel Aviv security conference a day after U.S. Defense Secretary Chuck Hagel said on a visit to Israel that U.S. intelligence agencies were still assessing whether such weapons had been employed.

U.S. President Barack Obama has called the use of chemical weapons a “red line” for the United States that would trigger unspecified U.S. action.

“To the best of our understanding, there was use of lethal chemical weapons. Which chemical weapons? Probably sarin,” Brun said in the most definitive Israeli statement on the issue to date.

Photos of victims showing foam coming out of their mouths and contracted pupils were signs deadly gas had been used, he said.

Forces loyal to Assad were behind the attacks on “armed (rebels) on a number of occasions in the past few months, including the most reported incident on March 19”, Brun said.

The Syrian government and rebels last month accused each other of launching a chemical attack near the northern city of Aleppo.

On Monday, Hagel said the use of chemical weapons by Assad’s forces would be a “game changer” and the United States and Israel “have options for all contingencies”.

Hagel met Prime Minister Benjamin Netanyahu in Jerusalem on Tuesday, a day after flying in an Israeli military helicopter over the occupied Golan Heights on the edge of the fighting in Syria that has entered its third year.

“This is a difficult and dangerous time, this is a time when friends and allies must remain close, closer than ever,” Hagel, in remarks to reporters before his talks with Netanyahu, said about the United States and Israel.

Discussions between Syria and the United Nations on a U.N. investigation of possible use of chemical weapons have been at an impasse due to the Syrian government’s refusal to let the inspectors visit anywhere but Aleppo, diplomats and U.N. officials said last week.

U.N. diplomats said Britain and France had provided Ban’s office with what they believed to be strong evidence that chemical weapons also had been used in the city of Homs.

Israel, which has advanced intelligence capabilities that it shares with its Western allies, has voiced concerned that parts of Syria’s chemical arsenal would end up in the hands of jihadi fighters or the Lebanese guerrilla group Hezbollah, with which it waged a 2006 war.

Israel leaders have cautioned they will not allow that to happen. In an attack it has not formally confirmed, Israeli planes bombed an arms convoy in Syria in February, destroying anti-aircraft weapons destined for Hezbollah.

Brun, who was speaking at the annual security conference of The Institute for National Security Studies at Tel Aviv University, said Israel’s military was studying a number of future scenarios facing Syria.

“More likely, as time goes by, are the scenarios of chaos and anarchy, or that of (Syria) breaking up into cantons. These pose major challenges for Israel. The chance of a different central government still exists, but it is growing less likely with time,” Brun said.