Report of Dr.’s Appointment by Col Marty of the USMC 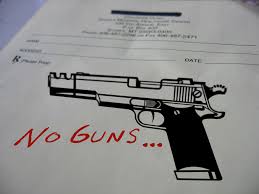 I visited a physician last week. It was a “new” doctor in the practice–a young lady (at MY age, EVERYBODY is “young”–when I was born, the Dead Sea wasn‘t even sick) who was quite enthusiastic. She was obviously a liberal by her dress and manner. I was thinking of hitting on her, but I don’t like the phrase, “You remind me of my grandfather.”

She asked me what was wrong, and I replied, “I have a cut on my leg; and I think it may be getting infected.”
She said, “Before we start, I have to ask you a few questions. Are you allergic to any medications?”

She said, “Do you have any guns in the house?”

She replied, “Guns. Do you have any guns in the house?”

She said, “I’ve got to ask this question. It is required under the Affordable Care Act.”

I asked, “What are you going to do with the data?”

She said, “We compile it, amalgamate it, and submit it to the government.”

She said, “What’s a Tommy Gun? I don‘t think that is the kind of gun they are concerned with.”

She looked puzzled. Then she brightened up and asked, “Do you have any assault rifles?”

I attempted to look puzzled, and said, “I don’t know. What is an assault rifle?”

I said, “As a matter of fact, I do. I have a replica of a Revolutionary War musket.”

She began to look a bit exasperated. I pretended not to notice and kept up the appearance of trying to be helpful.

She said, “Do you have anything more modern than that?”

I replied, “Well, yes I do. I have a replica muzzle loader from the Civil War. Do you know the difference between a musket and a muzzle loader?”

She rather peevishly said, “No, I don’t; and I don’t want to. What else do you have?”

She calmed down (a bit) and asked, “Anything else?”

She stated, “Well, then, I’m not interested in them. Anything else.”

I replied, “Well, then, I have a Colt, a Luger, a Glock, a bazooka, a Parabellum, a Kalishnikov, a Henry, a Uzi, a Llama, and a Beretta–but they are not rifles.”

She then said, “I’ve had enough of this. I think you’re toying with me. Let me see your leg.”

I then said, “Excuse me, but before you look at my leg, I have a few questions to ask of you.”

She replied, “Of course. What are they?”

I said, “I have given you a lot of information about my guns. I am somewhat concerned about your knowledge and ability to assimilate, make coherent sense of that information, and report it correctly. Do you know the difference between a .22 caliber and a .223 caliber? It’s a rather fundamental difference.”

I said, “I see. Let me ask some more relevant questions. “How much money do you make?”

She said, “That’s personal, why do you ask?”

I said, “Well, in pushing the Health Care Act, my president cautioned the population about doctors that would amputate a leg rather than treat a cut because they make more money that way. Consequently, I wish to know if you are financially troubled. What kind of car do you drive? What are your house payments? How much is your mortgage? How much credit card debt do you have? Do you have a student loan; if so, how much?”

She said, “I’m not going to answer those questions. You have no right to ask them.”

I then asked, “Do you have training and education in homeopathic techniques? Do you know the benefits/effects of CoQ10, ginseng, fish oil, Creatine, BCAA, and other such herbal treatments?” Do you know the difference between Panax ginseng, American ginseng, and Siberian ginseng?”

I then asked, ”Well, have you studied it at all?”

She replied rather defensively, “NO; it’s all a bunch of hogwash anyway.”

I said, “Oh, then you have read the research on it. What have you read?”

She then said, “I don’t waste my time reading such things. Why are you asking me these questions?”

I said, “Well, if I’m going to turn my body over to you for treatment, I believe it is reasonable for me to know something about your motivation, training, experience, and competence. Do you know anything about the practice of holistic medicine?”

She said, rather angrily “No, I don’t.”
I said, “Oh. O.K. How much experience do you have in practicing medicine?”

She replied, “Well, not very much.”

She rather peevishly said, “All my credentials are posted in the waiting room.”

To which I said, “Really? The rank of your medical school is posted in the waiting room? Do you have any experience with leg injuries? If so, how much?”

I guess that was too much for her. She rather crossly said, “I think it would be best if you saw a different doctor.” and started to leave the room.

I said, “You know, doctor. You asked me irrelevant questions about my guns, and I answered them. Whether or not I own guns is really none of your business and has absolutely nothing to do with any treatment you might prescribe. On the other hand, I ask you questions quite relevant to my situation, and you refuse to answer them. Isn’t that somewhat backwards?”

She said, “But I HAVE to ask those questions. It’s the law.”

To which I replied, “Actually, it is NOT the law. Here is what the law says–taken directly from the Affordable Care Act:”

“You may verify this at: http://housedocs.house.gov/energycommerce/ppacacon.pdf and
http://wizbangblog.com/2013/01/10/obamacare-amendment-does-not-forbid-gun-and-ammo-registration/.”
“As you can see, you have broken federal law TWICE–once by asking, and once by collecting data. It is perfectly legal for me to own guns; it is not legal for you to ask and/or collect such data. YOU are breaking the law, and yet YOU are the one that is angry. Not only that, but you erroneously stated that you must ask such questions, and you did it in a very authoritative and convincing manner. You gave me false information, which I then acted upon by answering your questions. On that basis, how can I be expected to trust your medical judgment? When I attempted to ascertain your medical competency, you became defensive and hostile.”

“There is really no need for me to see another doctor in this practice. I‘ll go somewhere else, where my privacy is respected, and I can trust the information I receive.”

3 thoughts on “Report of Dr.’s Appointment by Col Marty of the USMC”