March 22, 2013 – NORTH KOREA – North Korea was rattling its sabers and sparking fears overnight. Its military is now threatening South Korea, Japan, and the United States saying that war is coming. The statement from military leaders have said: “Outbreak of war in Korea is now just a matter of time. Nothing can prevent war from breaking out.”

The communist North is claiming that its missiles will target U.S. bases in Guam and Japan. That is where some of our nuclear submarines and B-52 bombers are based. The threat came two days after U.S. bombers carried out simulated nuclear bombing raids on North Korea. Tensions spiked in the region after North Korea carried out its latest underground nuclear test last month. And then again after new United Nation sanctions last week. –KTNV 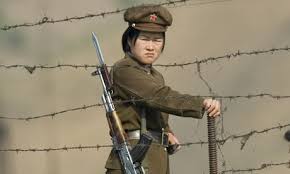 Military defections: Twelve armed North Korean soldiers apparently defected across the border to China’s Jilin Province earlier this month but were captured by Chinese troops and sent back to the North. Late last month, two North Korean soldiers shot and killed their senior officer and fled to Jilin Province, prompting experts to suspect something unusual is going on in army units stationed along the border with China.

The 12 North Korean soldiers stationed with a border unit defected across the Chinese border in two groups but were sent back after being captured by Chinese troops, a diplomatic source in Beijing said Thursday.

Another source in the Chinese town of Yanji near the border with North Korea, said the other two North Korean soldiers shot and killed their senior officer and crossed over the border into Changbai, Jilin Province, causing Chinese troops nearby to scramble into emergency mode.

The spate of defections may be related to food shortages. International aid to the North has dropped sharply since it launched a rocket in April last year, affecting the food situation for soldiers as well as ordinary people. With food rationing concentrated in Pyongyang and military units along the border with South Korea, troops on the border with China are apparently subsisting on corn and potatoes they grow on their own.

“As spring progresses and crop inventories are depleted further, we may see an increase in the number of defecting soldiers,” said an informed source.

They were former defectors from the North and had entered China to help their families escape North Korea. –Chosun