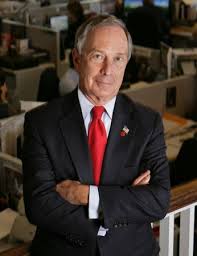 Gov. Cuomo had no idea 7-round magazines weren’t available. Mayor Bloomberg has no idea how to safely handle a gun…

Mike Bloomberg is spending $12 million on attack ads designed to force U.S. senators to vote for national gun control laws that will supposedly save lives. However, the New York mayor’s commercials running in 13 states over the next two weeks could cause injury or death by showcasing irresponsible handling of a firearm.

Mr. Bloomberg’s organization, Mayors Against Illegal Guns, produced two ads featuring a man holding a shotgun, wearing plaid flannel with a camouflage cap and sitting on the tailgate of a pickup truck. While a child swings on a tire in the background, the man says, “I support comprehensive background checks so criminals and the dangerously mentally ill can’t buy guns.”

The ad does not specify if the man is an actor, but he violates all three gun safety rules taught by the National Rifle Association (NRA). (Click here to see the ads.)
The first rule is to always keep the gun pointed in a safe direction. In this case, the children are playing in the yard. Although the viewers can’t see what is to the side of the truck, the man should be pointing the muzzle in the air or at the ground.

The second NRA rule is always keep your finger off the trigger until ready to shoot.