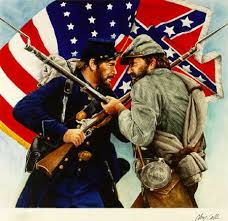 Daily Beast writer named Lee Siegel has issued an “edgy” rant about how much he hates the South, and how he wishes he wouldn’t have to deal with our politics, religion, people, or culture anymore.

He wants us to secede.

Seigel’s display of contempt for flyover country isn’t even original, and appears to have been plagiarized wholesale from a 2004 rant by an anonymous fellow leftist. It’s hardly surprising that Seigel stole his rant. Those that refuse to allow diverging thoughts are by definition stuck regurgitating the same rhetorical hate speech.

But what about this idea of secession? As I recall, the South had tried to take divorce the North in 1861. The North responded by starting the bloodiest war in our history. This not-so-Civil War was the second Great Trashing of the Constitution by statists. The first wasMarbury vs. Madison, when the Supreme Court decided it knew more about the Constitution than the guy who wrote it. In both instances, the federal government usurped power from the states, and we’ve been on a road to eventual tyranny of the federal government over the rights of the states and the people ever since.

The few scattered, halting attempts at putting the brakes on federal tyranny that we see from time to time (like the recent defeat of federal gun control bills, panning of Obamacare, and outrage over Obama’s “blessing” of genocidal Planned Parenthood) are at the root of Siegel’s anger. Like his progressive brethren, Siegel only wants the skin-deep illusion of diversity, where people look different, but adhere to the same Orwellian ideology.

He labels the object of his hate “the South,” but that is simply code applying to any area of any size in these Not-Remotely-United States where individual rights are still held sacrosanct. When the linguistic fig leaf is stripped away, we see that the hatred Seigel harbors in his heart also applies to much of New York north and west of the Tappan Zee, California beyond the blight of coastal cities, and indeed most of the rest of nation as a matter of geopolitical geography.

Seigel’s goal—and he’s at least an honest-enough totalitarian to admit it—is lockstep uniformity of thought and action, cloaked in a rainbow of colors… a totalitarian Benetton. Anyone, anywhere, who fails to buy into his ideology is “southern,”  branded an Other, and considered an enemy to be eliminated.

Seigel’s plea for the “South” to secede is nothing more or less than the shunning of every person in every part of the nation that doesn’t believe precisely as he thinks they should. So should we secede to make him and his fellow would-be elitists happy?

The  ideological “South” that believes in the Constitution as it was written and the rights of the individual makes up not just the traditional states south of the Manson-Nixon line, but the southwest, the midwest, the mountain states, and many of the non-urban areas inside even the bluest of the blue states.

Seigel wants an ideological realignment of this nation to assert 100% domination in his proverbial backyard where dissent in completely quashed, but what he’s going to get when push comes to shove is a Constitutional restoration.

We’re not going to be content with just parts of the nation, sir. We’re going to take all of it back, and, that is very easy to do, once we finally decide to take action. It will be short, brutal, and effective, completely destroying the trust in “Big Brother,” and relegate socialism back to the ash heap of history from whence it came.

As the Great Cowering in Boston showed us, a single unarmed man can hold a city of six million progressives hostage for 16 hours, despite all the visually impressive paramilitary theatrics brought to bear by the state.

How long do you really think you will last, Mr. Seigel, if a few dozen men scattered across the country simply turned off your power at the source? I’ve been chased by agents of the state before after “threatening” these assets. It took them 30 hours to “find” me, and they only did so then because I literally began unloading my gear in their parking lot outside theirwindows. Leviathan is slow and dumb.

Shutting down an electrical substation is child’s play. Shutting down a half dozen simply takes more time. Once that is done, you have an urban area without mass transit, sanitation, communications, and distribution systems. It would be a scant three days (five at the most) before a failure of civility occurs. New York, Boston, Washington, Chicago, Los Angeles, San Francisco, Austin, Denver… how long do you think groupthink will last without electricity to these cities? When people realize that the state can’t do everything for them after all, you’ll lose your power base, not just your power.

Keep in mind that as the power collapses, the men and women that have lorded over these cities don’t just lose the faith of the people they can no longer support, they also lose their propaganda machines. There will be no MSNBC, no New York Times or Washington Postor Daily Beast to carry out the crucially important tasks of reinforcing group think. Those that cling to your “the state will take care of us” lie will die, while those that adapt and learn to fend for themselves and their communities will survive. These survivors  will be never trust the state again, an effect of evolutionary learning you never anticipated.

The harder desperate politicians attempt to use brute force to hold everything together, the more people will resist the system. Individual politicians and media figures will be targeted and eliminated. The rest of the elitists will flee the nation, probably to never return.

The current government will fall. Progressive ideology will be ended for at least the next generation.

Will we secede, Mr. Seigel? Hell no. Once you miscalculate and overreach and finally trigger a long-overdue battle for the soul of this nation, we’ll succeed in restoring it to the constitutional Republic the Founders intended.