Security will be the rule in Boston Tuesday 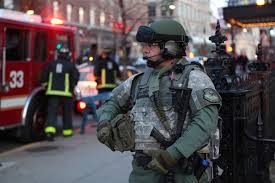 Boston will be largely open for business on Tuesday, but so much will be different, as a wounded city awakens to higher security and heightened vigilance following the deadly bombings at the Boston Marathon.

Heavily armed police will be out in force. Bags will be searched on the ­MBTA. And the area around Copley Square will remain a crime scene, closed to the public.

Not since the Sept. 11 attacks has Boston witnessed such a show of martial power coupled with a sense of vulnerability and grief.

The scores of rifle-wielding state troopers, National Guard members in fatigues, and municipal SWAT teams who descended on the city today will continue to patrol on Tuesday, particularly around the finish line of the marathon in the Back Bay.

“That area is pretty much going to be locked down,” Governor Deval Patrick said at a press conference on tonight. “It’s not going to be easy, simple, or regular. And, I think, in most cases, people are not going to have access to that area.”

Patrick said the closed-off area spans the length of Boylston between Berkeley Street and Massachusetts Avenue, and on either side of Boylston from Newbury Street to Huntington Avenue, a section nearly a mile long and three blocks across.

Mayor Thomas M. Menino’s office said in a statement that the closed-off area will probably remain off limits to pedestrians and traffic for several days.

“People returning to work tomorrow will notice an increased police presence in the city,” the statement said. “They should not be alarmed by this presence of National Guard and other armed officers at key points on the city including in an around the MBTA.”

Exit 22 off the Massachusetts Turnpike, which feeds into Copley Square, will remain closed to traffic on Tuesday. The MBTA’s Copley Station on the Green Line will also remain closed, but the line will continue to run through the Back Bay, stopping at Hynes and Arlington.

Boston Public Library in Copley Square, the Shops at the Prudential Center, the Copley Place mall, and the Hynes Convention Center will be closed, as will the Boston Common garage, although drivers will be allowed to retrieve their parked cars there.

Many businesses in the neighborhood are telling their workers to stay home.

Emerson College’s president announced the campus in downtown Boston would be closed Tuesday after seven of its students suffered apparently minor injuries in the blasts. The students were treated at a local hospital and released, the school said on its website.

“Today has been a traumatic day for our community,’’ Emerson President Lee Pelton said in a note to the campus. “I have come to understand that the magnitude of what occurred has been extensive and for that reason, I have decided to close the campus on Tuesday to provide a day of healing and reflection.’’

Secretary of Transportation Richard A. Davey said T passengers would be subject to random searches of their bags, and should expect to see state troopers and Nation Guard members in the subway system.

Major public gatherings have been cancelled or postponed for now. The NBA announced that the Celtics game against the Pacers on Tuesday night has been canceled and will not be rescheduled.

Security has been heightened at Logan International Airport, said Massport spokesman Matthew Brelis, who declined to provide details. He said he was not aware of any flight cancellations.

Boston Common, which saw bus after bus of National Guard troops and SWAT officers in fatigues arrive this afternoon, will remain a staging ground for law enforcement officials.

Law enforcement officials hope the heavy deployments will comfort city residents like Asia Rodriguez, 18, who lives in a Berklee College of Music Dormitory on Massachusetts Avenue. Berklee College will be closed on Tuesday, but Rodriguez said she would have no qualms about walking around the area.

“I think I would go back to Boylston, I guess, for closure,” she said. “I frequently walk down there. It’s a part of your life.”

“Obviously, it got my adrenaline going and made me a little nervous, but with all the cops in the city I feel safe,” he said.

Some churches in Boston will open their doors Tuesday to people seeking solace. The Arlington Street Church is planning to hold a candlelight vigil at 8 p.m.

“There is no one to blame, no sense to be made of the senselessness, nothing to distract us from the raw horror of the violence that shattered a beautiful afternoon in Boston at its finest,” said the Rev. Kim K. Crawford on the church’s website.

Crawford said in a phone interview tonight that she had received messages of condolence from clergy in New York City, who, she said, “understand so deeply what it is like to have this happen in your city.”

2 thoughts on “Security will be the rule in Boston Tuesday”