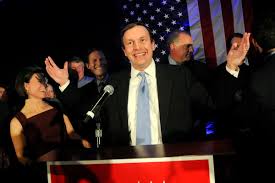 In Senator Chris Murphy Versus Guns we discussed how Senator Murphy is playing the poll card with his colleagues.  The polls support us, he says.  But I pointed out that they don’t, and (via David Codrea) here is more evidence.

In an ongoing poll conducted of its membership by Gun Owners of America, 96.2% of over 18,500 respondents have thus far opposed Obama’s universal background check proposal.

So many gun owners tried to register their opposition to banning private gun sales that GOA’s server crashed, and many who were opposed this framework for a national gun registry were unable to cast their votes.

Gun owners do not support universal background checks and do not support an assault weapons ban.  In fact, gun owners do not support any further restrictions on guns.  Any poll that tells you otherwise is a lie.  I just don’t know how else to say it.  The numbers, questions, data, statistics, sample population, sample location or something else, or all of the above, are fabricated.  I’m a gun owner and I run among a circle of gun owners, and I know.  Don’t trust the polls.  In fact, don’t trust Obama’s anti-gun campaign which is proven to be a fraud.  Senator Mpuphy is lying to his colleagues, and he knows it, even if his colleagues don’t know.

But Senator Murphy recently got an earfull of anecdotal evidence at a townhall meeting.

When U.S. Senator Chris Murphy appeared at a “town hall meeting” in Manchester on Sunday, things became so heated that police had to be called to the scene, although no arrests were made and the senator still stayed late to answer questions and speak with constituents …

… at several points during the event, which was held at MCC on Main, Murphy was interrupted by members of the audience who kept trying to steer the dialogue back to the Second Amendment and the senator’s views on gun control. Things became so unruly during the event, that Manchester Mayor Leo V. Diana had to intercede on Murphy’s behalf and ask the crowd to remain quiet and orderly as Murphy was trying to discuss other issues and answer constituents questions.

Several videos posted to YouTube (and attached to this article) show Murphy continually being interrupted by members of the audience, and the event eventually deteriorating into a shouting match in the crowd.

“They were totally disrupting the meeting,” said Diana, a Democrat. “At one point, it just got into this shouting match.”

A shouting match.  Try to take the guns away.  It’ll be more than a shouting match, and your lying polls won’t be any consolation.