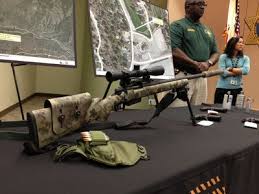 I predicted it.  Now, the L.A. Police have found a sniper rifle in the city.

Thanks to a push from local faith-based organizations and an assist from the Pasadena Police Department, 135 guns were taken off the streets Saturday at the Pasadena Area Gun Buyback and Peace-source Fair.

More than a hundred gun owners drove up to the Pasadena PD and unloaded guns to be traded for gift certificates to Ralphs, Target and Best Buy stores.

According to Lt. Tracey Ibarra, of the weapons collected, about half were rifles and half were pistols — and there were some especially notable items, including an AK-47 assault rifle, an SKS assault rifle and a sniper rifle with scope that would be repurposed by the department for training use.

Make no mistake about it.  The press doesn’t know the difference between a magnifying glass and a rifle scope, or a detachable magazine and a flash suppressor.  They got this stuff from the LAPD, who “repurposed” the weapon to something they wanted.  The LAPD told the press that they bought a “sniper rifle” in the buyback.  Unfortunately, the police are still controlling the narrative.

I had previously asked the question of a purchase at Walmart, “If someone had purchased a really nice bolt action .308 with expensive glass, what would the press have done if this had gotten into criminal hands?  Perhaps call it a “sniper rifle?”

No.  It doesn’t have to be in criminal hands at all.  It just has to be a bolt action rifle with a scope.  But make no mistake.  The only time it will really be a sniper rifle to most civilians is if the police ever try to confiscate such firearms.  If they do that, millions of people will “repurpose” their guns just like the police did.