So What is Going on with Immigration Legislation? 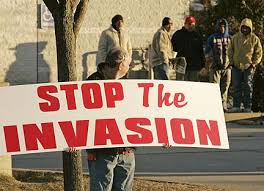 If your first exposure to the mainstream media would have occurred in the past week, you would not know that the surrender of your country to foreign invaders from the south is one of the top agendas being pushed within the subversive foreign body posing as our Congress.

It is amazing how something as big as the blanket amnesty for an invasion force consisting of sixty to a hundred million foreign nationals can just be slid to the back burner and removed from the public eye when the agenda is meeting heavy opposition. And then, at the first opportunity for an advance of the agenda it can be brought back front and center like it is the only thing we have to consider in reference to our daily lives and state of being.

I believe the fraudulent powers that be have jumped back from so called immigration reform because the anger of we the people at the prospect of giving our country and our livelihood over to the foreign invaders has become undeniable.  Just like with the push to confiscate our firearms, the people have not only said “No, hell no”, but rather, “Just try it and see what happens to you.”

The reality of the necessity to be armed in the face of armed criminals is a simple step of logic, just as is the removal of those who have come here to take everything you have or they will take it.

We are being told that the so called immigration legislation is stalled.  We have learned that this is just a tactic that is being implemented to hold the situation in limbo until our attention can be diverted in another direction, which the elite believe will allow them the opportunity to commit their treason and have it established as a fait accompli before we can refocus and counter the attack.

I think what they do not realize is that we see them for exactly what they are and that we are patiently waiting for them to dare set their communist foot down on the other side of the line each and every one of us has drawn, which will result in an absolute uprising across the board that will be so all encompassing and irretractable that none of us can even imagine what it is going to look like.

What will be will be.  We will do what we have to do, quite simply because we know the alternative is slavery.  So let our enemies find their comfort zone and convince themselves that they can get away with it.  And the sooner the better.

2 thoughts on “So What is Going on with Immigration Legislation?”