So what is in the News, or better yet, what’s not? 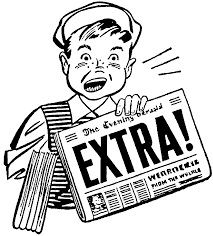 To say our right to own and bear arms is facing an all out attack by the communist infiltrators within what is no longer our government would be putting it lightly.  The goal being of course to put we the people under the draconian authority contained in the UN Small Arms Treaty before it comes up to be signed in March.  We are talking about the disarmament of our people for the express reason of leaving us helpless in the face of the foreclosure of our country, a foreclosure admittedly brought about via international fraud.

It is impossible to comprehend that any thinking person could believe one word coming out of the mainstream media.  It has reached the point to where they are no longer attempting to twist the reality but have been reduced to the shoddiest of simple diversions.

Our Bill of Rights is being dismantled right before our eyes and the lead stories coming out of the mainstream are centered squarely on a dramatic effect that should be left to the crime dramas.  Gun confiscation, representing limitless infringement upon an inalienable right, which is now being called a privilege, and the lead story is one woman out of 351 million Americans who may or may not have murdered her boyfriend or a prosthetic sporting Olympian who may or may not have shot his girlfriend, way over there in South Africa.

Anyone watching this crap with the slightest interest, I tell you to pull your head out of your ass and ask yourself what do these events, in the smallest degree, have to do with you and your situation?  And then if you can make the leap past the entertainment aspect, ask yourself why are these stories at the center of the mainstream reporting.

World War III looms as the dollar collapses and the US economy with it, to be followed by the world economy, to be followed by world famine, and these are the stories that get five minutes at the end of the mainstream broadcasts.

I have to believe that to buy into this debauchery of reality to any degree can only be perceived as the 21st century high technology equivalent of burying one’s head in the sand.  If this is the case and encompasses you, then I guess metaphorically speaking your ass must be sticking up in the air, putting you in the perfect position to get exactly what you have coming.

Heaven help any person I hear out in public discussing Jodi Arias and Oscar Pistorius, as I will walk right up and cuss them and curse them as the mush minded, dead headed, pathetic simpletons that they are.  And I will do so without any fear of any physical retribution as they are spineless cowards who choose to live in a false reality created for them by low budget actors whom they will find themselves enslaved to as a result of their impotence.