Solar eclipse gridlock: It was so busy in Madras, Ore., they called in the National Guard

Oregon has long been predicted to be a scene of major eclipse traffic jams, and even by Sunday, that was proving to be true: The Oregon National Guard was called in to Madras, a small agricultural city in the sunny part of the state, east of the Cascades.

Traffic was at a standstill for hours Sunday afternoon, gridlocked as well more than 100,000 people flocked to this small, pleasant town of 7,000.

Madras, pronounced like glad or sad — not like the plaid fabric or the megalopolis in India — sits on the centerline of the eclipse’s path of totality.

At Solarfest, a gathering at the Jefferson County fairgrounds that bills itself as a festival of music, science, camping and art, a pushpin map of the world marking where visitors had come from had so many pins there was no more room to document visitors from the western United States. Europe and South America were well-represented. A couple of pins were pushed into Guam. There were marked travelers from Tehran.

Many acres of farmland were turned over to a city of tents and motor homes.

Mt. Hood and Mt. Bachelor thrust into blue skies as hot air balloons fluttered through one part of the sky and a constant stream of skydivers rained down in another.

Rob Buckley flew with his family from Bristol, England, and set up camp. Buckley witnessed a total eclipse in Britain years ago. Though the sky had been thick with fog, the experience was wondrous enough to warrant a full family flight to a sunnier spot this time around.

His wife, curiously enough named Sun, was a total eclipse virgin. Their two kids, 7 and 9, had never witnessed an eclipse of any kind.

After the sky goes bright again Monday morning, traffic heading back to the airport will be horrendous. But with the sense of anticipation building Sunday, that didn’t seem to matter. 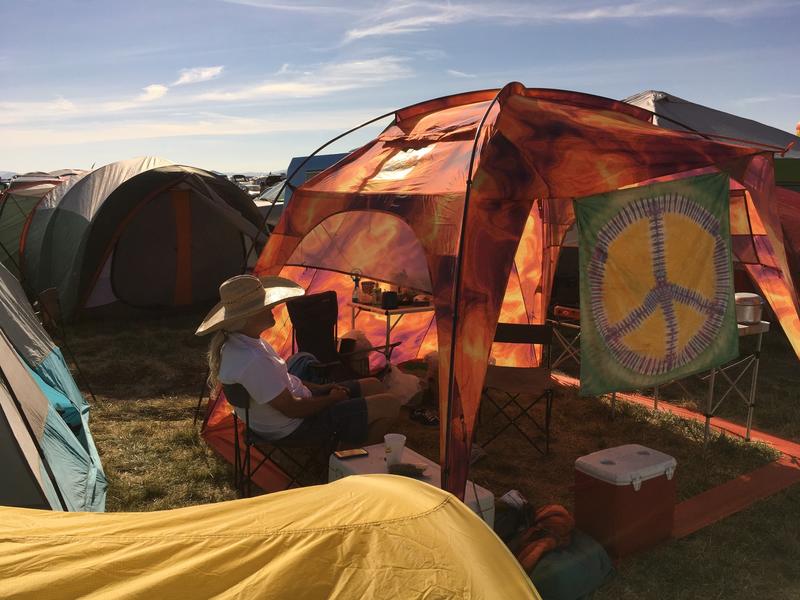 One thought on “Solar eclipse gridlock: It was so busy in Madras, Ore., they called in the National Guard”