Spain train crash death toll rises to 80; high speed may be a factor 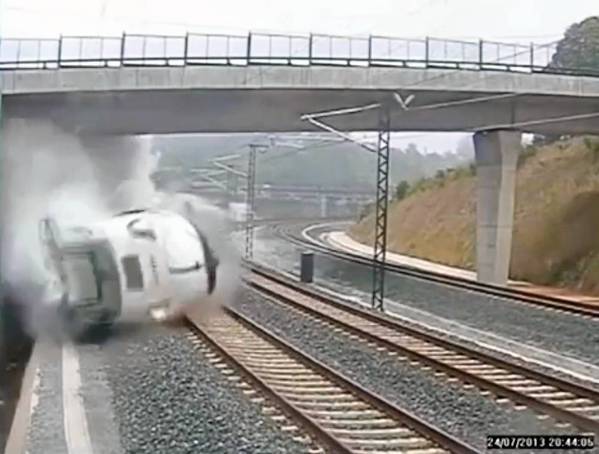 LONDON — Spanish Prime Minister Mariano Rajoy on Thursday promised two investigations of the deadly train derailment in northwestern Spain, with suspicion focusing on excessive speed as the cause of the disaster that has left at least 80 people dead, including an American, and scores more injured.

“We have lived through a terrible accident … which I fear will remain in our memory for a long time,” a somber Rajoy told reporters after visiting the site of Wednesday’s derailment near the Christian pilgrimage town of Santiago de Compostela in the Galicia region.

Rajoy said his country would observe three days of mourning for the victims of one of its worst railway accidents.

The U.S. State Department said Thursday that an American was killed and five were injured in the accident. A department spokesman did not provide details of the American casualties.

President Obama offered “heartfelt gratitude to the government of Spain and to the rescue personnel who are working to locate the missing and treat the injured, including at least six Americans.”

“Today the American people grieve with our Spanish friends, who are in our thoughts and prayers,” Obama said in a statement. “We stand ready to provide any assistance we can in the difficult days ahead.”

The Spanish Interior Ministry has ruled out terrorism as the cause, the Associated Press reported. In 2004, an Al Qaeda-inspired bombing attack on train stations in Madrid killed almost 200 people.

Instead, investigators are looking at driver error as a possible cause of the train leaping off the tracks at high speed. Video from a security camera at the derailment site showed the train traveling at what appeared to be extremely high speed around a curve.

Survivors also have spoken of the train hurtling around the bend. The AP said the track on that stretch was designed for speeds of up to about 50 mph.

The regional government in Galicia confirmed that police planned to question the 52-year-old train driver, who is in Santiago de Compostela’s main hospital with unspecified injuries, as both a witness and as a possible suspect, the news service reported. However, officials cautioned that possible faults in safety equipment were also being investigated.

Almost all those who perished were found dead on the scene, in an indication of the force of the derailment. Train cars lay crumpled or on their side. A local official likened the scene to Dante’s “Inferno.”

Rajoy said a judicial investigation of the disaster would be launched, as well as one by the government’s public works department.

The train was en route from Madrid to the port town of Ferrol when it jumped the tracks Wednesday evening with 218 passengers on board.

Santiago de Compostela, which was on the eve of hosting a major religious festival that attracts thousands of pilgrims from all over the world, canceled its planned celebrations.

“For a native of Santiago like me, this is the saddest day,” Rajoy said.

He thanked residents for turning out to help rescue workers and the injured, and for lining up by the hundreds to donate blood.

2 thoughts on “Spain train crash death toll rises to 80; high speed may be a factor”