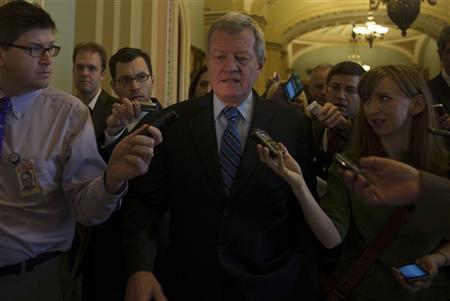 (Reuters) – Legislation allowing states to collect sales taxes on goods sold over the Internet made its way to the Senate floor on Thursday – a sign that a decades-long struggle by states to tax businesses beyond their borders could end this year.

In February, both chambers took up, with bipartisan support, identical bills that would clear the way for states to collect the so-called “Amazon tax.” On Thursday, the Senate debated incorporating the legislation as an amendment to its budget resolution.

Even if the amendment passes, though, the resolution is non-binding and the move would be largely symbolic. The budget blueprint will likely serve as a starting point for fiscal negotiations later this year when current borrowing authority will be exhausted.

“I cannot think of an instant where this Congress has legislated that a state can go into another state and enforce taxation laws,” said Senator Max Baucus, of Montana, the Democrat who chairs the Finance Committee. “This is revolutionary.”

Baucus said the bill should be incorporated into tax reforms that his committee is currently considering and not attached to the budget resolution.

“How can this be a part of tax reform when it’s not a part of the tax code? This is a question of states’ rights,” said Senator Lamar Alexander, a Republican from Tennessee. “Does a state, any state, have the right itself to decide to collect existing taxes from the people who owe the taxes?”

In 1992 the Supreme Court decided the patchwork of state tax laws made it too difficult for online retailers to collect and remit sales taxes. Currently, states can only tax Internet sales made by companies with a physical presence within their borders. In practice, that means online retailers such as Amazon.com Inc charge sales tax in some states and not in others.

Large Internet retailers are worried the tax could drive up the cost of doing business. They would also have to create new systems and software to collect the surcharges, adding to their costs. Amazon said in July it prefers having the tax issue resolved at the federal level.

When the 2007-09 recession caused states’ revenues to collapse, both Republican and Democratic governors advocated for the tax as a financial solution that would not require the federal government to provide direct aid.

Virginia recently passed a law replacing part of its gas tax with revenue it expects to receive from an on-line sales tax and neighboring Maryland is looking into a similar scheme.

The legislation would force “businesses in states like mine with no sales taxes to collect taxes,” said Senator Kelly Ayotte, a Republican from New Hampshire. “What it is about: Officials in cash-strapped states across the country looking for new ways to plug their budget holes.”

Small retailers, meanwhile, have said the sales tax will allow them to compete with massive online retailers.

The legislation would “level the playing field for small retailers in Minnesota and across the country,” said Senator Al Franken, a Democrat from Minnesota. “The current sales tax system makes it impossible for them.”