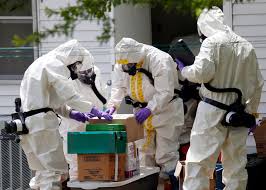 OZARK, Miss. — Authorities in Mississippi say they are searching for the chief person of interest in the investigation of poisoned letters sent to President Barack Obama and other officials.

Itawamba County Sheriff Chris Dickinson says he is helping the FBI, which told him Everett Dutschke had been under surveillance but slipped away on Wednesday.

Itawamba deputies searched a home in Ozark where Dickinson said Dutschke was believed to have been on Wednesday. They found no one.

The sheriff says he believes a friend of Dutschke “may be helping him to lay low.”

FBI spokeswoman Deborah Madden would not comment on the search.

Dutschke did not answer his cellphone when AP tried to contact him on Thursday.

Charges in the case were dropped against an earlier suspect.

One thought on “Suspect in ricin letter probe goes missing”