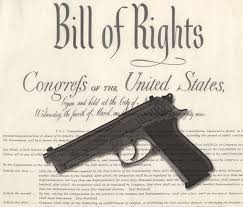 “A well regulated Militia, being necessary to the security of a free State, the right of the people to keep and bear arms shall not be infringed.” 238 years ago on April 19, 1775, colonists sent the British troops fleeing back to Boston. The troops engaged the colonists in battle at Lexington and Concord, in what now is characterized as “the shot heard round the world.”

We remind those in office today, those who seek to destroy our heritage and rewrite the legacy of our forefathers who stood up against the British, it will not happen on our watch. There was no Constitution in 1775, there was no United States in 1775, there was no Bill of Rights in 1775. The Colonists knew what was coming down, they were prepared, their munitions were amassed for defensive purposes only. They foresaw that the British overseers would soon force them to give up more of their rights.  The Colonists endured years of tyranny but they were not afraid of the enemy. After all, they had a natural right of self defense, no laws gave them that right, it was a God given right and they had the courage of their convictions.

On July 4th this year we will celebrate the birth of our nation, the 237th to be exact. Fireworks, parties, picnics and parades will mark the occasion, but to many of us, the day will evoke memories when this country was free of dictators, rulers and tyrants, when socialist politicians were jailed. Days and years so distant some barely remember them.

To go back to those days of yore is not an eventuality unless we purge the government of today’s traitors to the Constitution. The imperative here is to be flexible for what might be; a government collapse is always a possibility. Make no mistake about it, we are a divided nation; either we stand together or fail apart. Twenty five states are not at all happy with the goings on in Washington D.C. An insurrection can raise its ugly head at anytime.  Washington is well aware of this probability and they will try one more time and one more time after that to take away your weapons of self defense.

We are fast approaching the stage of the ultimate inversion: the stage where the government is free to do anything it pleases, while the citizens may act only by permission; which is the stage of the darkest periods of human history, the stage of rule by brute force.