The Legacy of Hillary Clinton: The World’s on Fire – Party On 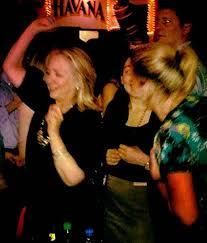 Hillary Clinton, the most traveled Secretary of State in US history, began her term as Secretary appointed by a person she had opposed in the Democratic Presidential primary in 2008. She and that person had many differences. One difference came up when one of her supporters, Philip Berg, a prominent attorney, and a former Democrat Party chairman in Montgomery County, PA, insisted her opponent, Barack Obama, was born in Kenya and Berg tried to get the matter dealt with in a Federal Court. That did not work out and Hillary became Secretary of State.

She immediately got to work meeting with her counterparts all over the world. Everywhere she went, she and her friends would have a night out on the town. In 2012 camera crews caught some of the action in Columbia where she was attending a Summit of the Americas. There she was referred to as the ‘Secretary of Partying’. One of the crew noted her trip to Estonia, when she was a US Senator, where she participated in a vodka-drinking contest. One of the newspapers covering her misspelled her first name in a headline “SWILLERY”

As Hillary reached the finish line there was a State Department gathering in Vienna, Austria that required more security for that event and they got it.

Meanwhile, in Benghazi, Libya a Consulate was on fire and 4 Americans died, lacking the security they had begged for.

In all the countries that Hillary visited it is difficult to see any sign of a beneficial influence. As a matter of fact the list of countries having significant problems has risen dramatically. That list would include Syria, Libya, Afghanistan, Iraq, Pakistan, Egypt, Nigeria, Mali, Sudan, Somalia, Tunisia, Ethiopia, and many more in Africa and the Middle East. Unstable governments are all over the world.

Our problems with China and Russia have increased. North Korea has become a greater threat. And something that our State Department has paid no attention to: over 100 thousand Christians have been slaughtered worldwide for each of the last four years and many are from the aforementioned countries. They died simply because of their beliefs.

And then there is a list of countries that have great economic problems. Examples would include Greece, Spain, Portugal and the list goes on.

A stellar effort in problem resolution is nonexistent.

At the White House, as First Lady ‘Hillary Care’ was a disaster, and there are still questions about the death of Vince Foster, a White House Councilor.
In Arkansas as First Lady there were some accomplishments, but then there was ‘Whitewater’, and certain activities at the Mena Arkansas Airport.

As to a legacy, you decide.

3 thoughts on “The Legacy of Hillary Clinton: The World’s on Fire – Party On”