The North American Union – Whether You Want It Or Not 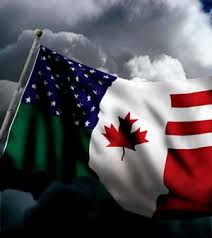 On January 4, 2012, the insurgent infiltrator, Barry Soetoro, sent a memo to Homeland Security, putting an end to any illusion of border security and  instituting a blanket amnesty for any and all who would care to stroll across our southern border and shove their faces into the trough.

The number of illegals within the United States has, for the past few years, been reported to be at 11 million.  Now we find out that that number represents only a fraction, as it is admitted that only 3% of those who have been crossing into the United States are even so much as noticed.

ICE has filed a lawsuit against the Obama Administration as they have been ordered to not enforce our immigration law, which is in reality another violation of our law as it equates to aiding and abetting an insurgency.

Most recently, as if to spit directly in our faces, it was revealed that the insurgents within are advertising our social programs down in Mexico to encourage further invasion.

And let us not forgot the 2000 foreign felons released on our streets to terrorize us as punishment for the communists not getting their way with the sequester.

Premier Soetoro will be heading to Mexico this week to meet with Premier Enrique Pena Nieto to discuss the present demands of the Mexican government upon we American nationals and our property.

Last week, a group of Senators went down to Arizona to get a firsthand look at the situation and got to witness a felony crossing in progress.  The invader was apprehended, but what do you want to bet she is walking our streets as you are reading this?

Why don’t we just quit playing these games and have Obama come up on the screen of the television and state emphatically,

“Some Mexicans will be coming to your door today.  They are good people, only looking for a better life and you are going to help them.  Upon their arrival you will hand them the keys to your home and car and vacate and wait in the street to follow them to your place of employment in the morning.  You will teach them your job and humbly bow out and start getting used to your new status as an American national interloper.”

“This new policy is absolute and there will be a zero tolerance to any deviation from the protocol.  Any US national hindering the new foreign owners from acquiring their property, will be swiftly and harshly dealt with.  Should the foreign nationals want to rape or beat any of your family members, again, you will acquiesce and apologize for the offenses you have committed against these fine and decent people.”

I know this sounds a little demented, but really, how far off is this from the reality we are living in today?