The Rat Who Keeps Escaping Every Scandal 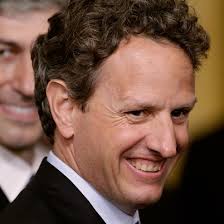 There is this running theory in politics and business that if one works within the Kissinger-Rockefeller sphere of influence, that lucky soul has immunity from any event as long as the individual continues to work for the benefit of the greater globalist financial cabal. Apparently the Teflon coating is still quite intact and functional for the former Secretary of the Treasury as the scandals which happened under his watch continue to explode with fresh headlines on the front pages of newspapers and the internet on a daily basis.

Timothy Geithner is best known as one of the most important Obama appointments to leave after the first term, yet his recent career moves seem to suggest a propensity to abandon ship after the vessel has struck an iceberg and taken on inordinate amounts of water. This was not the case in his early career where he cut his teeth on domestic and international political economics as a consultant with Kissinger and Associates. The biography continues with his career in government starting in 1988 with a stint as an attaché within the Treasury Department for International Affairs in Tokyo. In 2001 his work shifted to the IMF, a notoriously corrupt financial institution, before returning to work within the United States financial system exclusively.

The rat became CEO of the most powerful branch of the Federal Reserve Banks, as the New York branch was directly in control of so many aspects of our financial system from establishing authorized Primary Dealers for Treasury Bond auctions to oversight of every financial institution headquartered within the New York area including Wall Street. It was that role during the housing crisis which began in late 2006/early 2007 culminating in an economic crash and financial crisis in throughout 2008 and most of 2009 where his role and actions or lack thereof became glaringly obvious.

As financial institutions began to hide problems with their MBS (Mortgage backed security) portfolios and the derivative instruments affiliated with those investments, the Federal Reserve Bank of New York (FRBNY) under Geithner sprang into action and immediately began to work with the larger institutions to cover up the evidence of their malfeasance. While numerous bloggers and the occasional act of journalism started to report on the severity of the coming crisis in 2007, the FRBNY began to work with Bernanke and Secretary of the Treasury Hank Paulson to find taxpayer funding if necessary and creative accounting methods to cover the losses which were expanding exponentially on a monthly basis. During Geithner’s reign as head of the FRBNY the number of CEO’s, COO’s, and CFO’s penalized or prosecuted for securities violations and breaking the financial services laws which the Fed had responsibility for enforcement was zero and to this date remains ZERO.

The election of President Obama in November of 2008 in the midst of the worst economic crisis since the Great Depression gave Geithner the opportunity to abandon the sinking ship of Wall Street and the crisis the Federal Reserve found itself in and shift his power base to Washington, D.C. where his arrival as Treasury Secretary nominee will never be forgotten by any taxpayer.

Needless to say the Democratic Party’s excuse machine and the less than a coward vigilance of the Republicans guaranteed that Mr. Geithner’s “oversight” would be dismissed and he would become the Secretary of the Treasury. From there the illegal actions of the Obama administration during the seizure of General Motors and Chrysler from their respective bondholders was ushered through by strong arming lawmakers into silence while using his financial connections along with the lawyers from the Department of Justice to convince the world that the 5th Amendment did not apply to the bondholders because of the severity of the American economic decline.

Fast forward to the newly revealed abuses by the Internal Revenue Service regarding not just the deliberate delays and inquiries into Jewish, Tea Party, educational, and Conservative groups, but theillegal disclosure of confidential information to leftist media outlets as revealed by Breitbart  today. For those ‘low information voters’ who might be perusing these pages for the first time, the Secretary of the Treasury is the ‘boss’ over the IRS. Amazingly enough as Timothy Geithner is now in private life, not one media outlet, not even the vaunted Fox News has dared to ask the question that really matters to the latest revelations:

How is that every time there is a major scandal, be it financial, legal, or political, the person in charge of that department or agency is always in private life again shielded by Executive Privilege and never forced to answer for his actions or inaction?

The one continuing thread since the emergence of the financial crisis in 2007 to the front pages of our media until the events at the IRS revealed last week is that the person in charge, Timothy Geithner, is never questioned, never subpoenaed, nor ever charged with any culpability no matter the carnage left behind. Strange isn’t it, that this rat always seems to escape just as the scandals begin to emerge.

2 thoughts on “The Rat Who Keeps Escaping Every Scandal”