They are Gearing up for Something Big 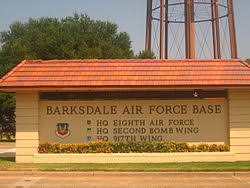 I just spoke with a close associate who has been working for the last three years at Barksdale AFB [Louisiana], on various construction projects. Likely, you will not remember that I wrote you about 6 weeks ago to ask for prayers for people in that area. This man is just a guy…a construction worker…been there all his life…salt of the earth kind of guy. In his words…”I am just a working man…doing the best I can do.”

To let you know, I have cautioned him, and literally begged him to leave that area…but he wants to hang on for as long as he can, so that he can tell people what he is seeing, and hearing…but it may be that he is finally rattled enough to pick up stakes and get out of there now. I am praying that he gets out soon.

Tonight, he called to let me know that the security and activity at Barksdale has been stepped up in his words, “by 300%”.

I asked as many questions as I felt that I could and took notes so that I could simply use his quotes to accurately report what he has stated.

“We were working on a scheduled job in the munitions dump area…building new blast walls, when AF personnel came in and told us we had to leave right now. We asked if were being given a “work stoppage order.” They replied “Get out now.” and escorted us out. “More like they rushed us out.”

On April 1, AF Chief of Staff and a bunch of other DoD dignitaries flew in to Barksdale. Those coming on the base usually have a sidearm and maybe a rifle, but since the 1st, “dignitaries are also wearing flak jackets.”

“They are gearing up for something big.”

“They are bringing in serious junk.”

“Moving in warheads…I was working in an area where cruise missles are brought in, put together, armed, and shipped out.”

His exact words were, “They are shipping some serious s*** over there.”

(Here I tried to ascertain whether these were going on ships or planes.)

He replied that “they are going everywhere.” He also stated that “they dropped a bunch dummy bombs on some islands off the coast of North Korea”..(I just read a confirmation of that from an intelligence newsletter, and confirmed by WND an hour ago.)

I asked him if Chinese officers were still on base. He replied that he had not been working in the area in which he first saw them, for the last three weeks, but he did say this…”The Chinese and the Russians are here…let me put it this way…everybody in the UN plus a few more are in here. (US)”

He heard and directly quoted one officer referring to the testing of anti-ballistic missle defense system, “We are going to see a real test, now.” He then said that he heard “Intelligence says there will be an attack on American soil.”

He then stated that these defense missile systems were ” being shipped to several bases.”

Now he is a construction worker, and has been on the base which has contracted the company he works for, with over 40 different jobs. He said that in those three years, he has never seen it this way. His overwhelming impression is that our forces are mostly scattered, a huge number of foreign military personnel are in the US, many foreign officers have been at Barksdale for about 6 weeks that he knows of, and that “anything can happen,” and “it looks like it will happen real quick.”

He then asked for prayers. So I am asking you to join in prayers for him…for all of them…

8 thoughts on “They are Gearing up for Something Big”