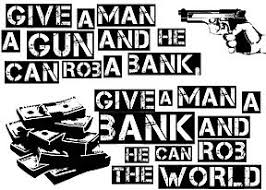 Before It’s News – by Money Morning

So-called “bail-ins,” which give banks the right to dip into your savings to pay for their lousy financial decisions, have been on the table for years, ever since Cyprus tested the idea.

But they’re moving beyond the “testing phase” now.

The latest clue came from a seemingly benign banking conference on December 2, when one man revealed some frightening central government intentions.

And anyone taking careful notes understands the consequences.

The market will not like the newfound acceptance for bail-ins. And it won’t get any warning – neither will we. Not from the mainstream financial outlets, anyway.

They’re not even covering it.

When the 2008-2009 financial crisis hit, it was unprecedented in scale and scope. Governments and central banks worldwide acted in concert to save “systemically important” banks through bailouts using trillions in taxpayer money.

Then came Cyprus, and the formula changed.

The fix in that case was a trial balloon, and a successful one at that, and I’ll describe it below.

Again just recently, we had the latest evidence this “new approach” is going mainstream, and I can’t believe it’s not being talked about.

You’re Not Getting the Full Story

Back in June, under the Irish Presidency, European finance ministers met to hash out banking reform. They agreed on the bank recovery and resolution proposal (BRR) and laid out a framework for a Single Resolution Mechanism.

They’re aiming to create a central agency that will have the ability to rescue ailing banks without using taxpayer money… in theory. The idea is for the European Union to integrate its banking system to the point where one overarching authority can act as a watchdog and resolve any problems across the entire union.

“Resolution tools” have been proposed in order to deal with future banking crises. These will include logical actions such as the sale of businesses, bridge banks, and asset separation tools. You know, the normal ways of dealing with a distressed business.

That would be benign, if it stopped there…

No One Reported the “December Slip”

On December 10, European finance ministers held marathon talks. Their goal was to reach an agreement by year’s end, so measures can be enacted before the current European Parliament’s term expires in May.

But some crucial elements of the agreement were left out of the story presented by the Associated Press.

It said the ministers have made headway towards a Europe-wide bailout fund. Whether that fund is to be built up through assessing fees on the banks and member states, and how much control over contributions each country would have, has yet to be finalized.

On December 2, Michael Noonan, Ireland’s Minister for Finance, dropped a bombshell at the Future of Banking in Europe Conference. Yet you’d be hard pressed to find any mention of it in mainstream media.

He discussed the need for a “toolkit” aimed at dealing with failing banks, while preserving essential bank operations and minimizing taxpayers’ exposure to losses.

The shocker was when a smirking Noonan said “I think the new key phrase is ‘bail-in is going to replace bail-out,‘ with all the implications that that carries.”

And it’s not just a threat to the European Union…

Coming Soon to the United States

Taxpayers in Europe and the rest of the developed world need to realize that Cyprus-style bail-ins are now becoming the new norm.

Understand this: the Cyprus bail-in saw all depositors in the affected banks, whose account balance exceeded the 100,000-euro insured maximum, take at least a 47.5% haircut on their deposits. This was seen as preferable over a European government bail-out, which would have been entirely taxpayer funded.

Shortly after the Cyprus crisis solution was presented in March, Dutch Minister of Finance Jeroen Dijsselbloem said in interviews that Cyprus would be the new template for future bailouts.

On that news, European markets began to tumble and the euro dropped against the dollar, as the cost to insure European banks against default rose. Dijsselbloem immediately backtracked, saying Cyprus was in fact a special case.

But it was too late. The cat was out of the bag.

Based on that and Noonan’s recent speech, it’s now clear the Cyprus bail-in model is in fact the new formula.

But here’s the thing:

Become Your Own Central Bank

Remember, this can happen in America.

Some observers suggest the 2010 Dodd-Frank Act codifies the use of bail-ins in the United States.

But America is far from alone. The E.U., United Kingdom, Canada, Australia, and New Zealand all have their own versions of bail-in laws too.

Let’s not kid ourselves. Banks will again face serious crises and suffer large losses. But the next time, your deposit will no longer be the bank’s liability. Instead, it’s already being considered the bank’s asset, one available to help recapitalize the bank and restore its equity, leaving you holding the bag.

These problems arise, by the way, thanks to our wonderful system of fractional reserve banking. But that’s a whole other article.

Meanwhile, you need to know how to protect yourself against a future bail-in.

Back in early November I told you your retirement account is fair game, and that you should protect yourself by becoming your own central bank. I also suggested there were several things you could do to protect your assets, like owning and investing in hard assets like gold, silver, energy, and real estate; by holding plenty of cash; and by holding some assets internationally.

The thing is, all of these are helpful strategies that can also help protect you against a future bail-in.

Like it or not, bail-ins will be a major part of future bank recapitalizations, meaning your deposits could be confiscated.

Cyprus was just the beginning. It’s time to prepare.

One thought on “They’re Planning The First Legal “Bank Robbery” In U.S. History”