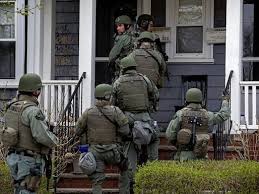 There’s really no other word that would accurately describe the behavior of the many agencies that stormed through Boston and its suburbs this week. Thousands of State and local police, sheriff’s deputies, FBI SWAT employees, Homeland Security Shock Troops, and National Guard soldiers conducted a massive search – virtually none of it in compliance with the 4th Amendment – in search of a single teenager. They practically ordered an entire city “locked down” and were presumably prepared to begin arresting residents who refused to comply with what amounted to martial law.

For a moment consider what the effective lock down means. As Charles W. Johnson presented the situation on Facebook, lockdown is “from the vocabulary of prison wardens, referring to a condition in which inmates are temporarily completely restricted in their movements and confined to their cells, in order to allow prison guards to conduct searches or contain and control what the inmates are doing.” He then asks these two questions: “If the police have the power to put a city ‘on lockdown,’ then what does that make the city? And what does it make the innocent people living in it?” Well, it would make the city a prison and the residents would be inmates, naturally.

Had the search not ended as early as it did, one question that seems appropriate is, “what about the 3rd Amendment?” Perhaps the least-addressed of all the amendments in the bill of rights, it’s no less relevant to the situation. While it refers specifically to soldiers, little distinction exists in light of these two photographs. The individual on the left is, according to the source, a member of the FBI, who helped in the search. The individual on the right is a soldier in Afghanistan. Note the similarities in the uniform, the equipment, and the weapons. Whatever legal differences exist between the military and civilian law enforcement are at this point irrelevant.

When I was deployed with the Army we would, as a matter of routine, occupy a home during combat operations in Iraq. Not only did the Iraqi people not have so much as a fig leaf of a bill of rights, but how were they to resist if they didn’t feel comfortable with our presence? The same goes for the people of Boston. Despite having the supposed protection of the bill of rights, it’s rather obvious that it either authorized the operation or was powerless to stop it, to borrow a phrase from Lysander Spooner.

Wilton Alston asked on the LRC blog “Didn’t The Terrorists Win A While Back?” He wrote:

Armored police vehicles. Tactical teams. Everyone under house arrest. Soldiers and/or other armed enforcers roaming the streets. House-to-house searches. We call it, ‘Terror in Boston!’ In any one of the several places the U.S. has invaded and/or is currently deploying drones, they’d call it, ‘Tuesday.’ Perspective. Stated differently, maybe the ‘terrorosts’ (sic) won a while back?

This is the larger point I hope to convey. The United States has, rather quickly, devolved into a totalitarian state that in terms of its militarized law enforcement is not much different at home than it is abroad. Of course the tactics are much more heavy-handed overseas, the police and military still do a reasonably good job not shooting innocent people here. Trigger-happy LA cops notwithstanding, they’re not nearly as dangerous here as they are in places like rural Pakistan or many parts of Yemen. Villagers are routinely preyed upon by drones launching hellfire missiles at children collecting firewood, wedding parties, and those brave enough to try and rescue survivors of those attacks.

A number of commentators have mentioned this already, notably Scott Horton, that all of this despotic martial law was worthless in terms of actually apprehending the suspected bomber. (I hope you’ll forgive my quaint use of the word “suspected.” Indeed he’s more than likely to be treated as an enemy combatant without rights.) As it was reported in the news media, within minutes of the lock-down being lifted a man stepped outside for a cigarette and noticed the boy hiding in his boat. He immediately alerted the police, who then proceeded to engage in a spectacular show of force, throwing grenades and reportedly firing hundreds of rounds at the wounded suspect. Thankfully no one has been reported injured by the unnecessary gun battle.

This raises another question related to the lockdown. Presumably it was in order to make it easier for the police/military to locate the suspect, Mr. Tsarnaev. But given how much effort the government put into the search, and how little exertion was necessary to actually locate him, one wonders how soon this all could have been over had a million pairs of eyes not been shuttered inside their homes for the better part of the day. We can’t know for sure, but it does seem to be a reasonable question, given the facts.

The residents of Boston and its surrounding communities are celebrating the heroic work of the police/military, and they’re expressing thanks for capturing the kid. Of course they’re not likely to feature testimony from residents who may be shocked at the extreme level force or the total disregard for existing law related to probable cause and those antiquated warrants. Many no doubt feel much safer. But should they?

The government claims a virtual monopoly on security and defense services, and yet three people were killed and as many as one hundred and seventy six were injured by the bombings. If they’re supposed to protect people from violence, they failed. Not only did they not prevent such an attack, they couldn’t even capture one of the suspects without some random guy Jonesing for some nicotine. It’s also noteworthy that the younger the suspect, the one captured alive reportedly ran over the older one after he’d been shot by police, after which he was captured. Had he not been run over, one wonders how long it would have been before he too was found.

Most aren’t considering the implications of what just took place and what sort of precedent has been set for such a situation in the not-too-distant future. To be sure, this will become a standard procedure likely to play out in cities and towns across America, albeit on a smaller scale and with less reporting. A murder suspect will be on the loose and a city’s police department will invoke the “Boston Rule” or some such phrase, and they’ll lock down a part of town, storm into people’s homes, pull them into the streets. It’s not so much a question of when, but how often and under what circumstances. No doubt much of the actions were the result of the high profile case, but such is the way with government. Once it gets a taste for new power, the state uses it, early and often. Chances are good this will become the new normal. “It worked, didn’t it?” they’ll say. And just like the two hundred SWAT raids a day that grew out of a single city’s decision to specially arm and train one unit, this will be repeated until it’s so common as to be unremarkable.

Of course the constitution is no guarantor of liberty, and its amendments are equally powerless to restrain the state. But given its purported function and that it’s supposed to represent the highest law in the land, it’s instructive to compare the actions of the state – and the people’s reaction in general to government action – with the laws. Watching it all unfold and seeing the mostly positive response makes me feel a bit like Walter Sobchak from The Big Lebowski, wondering if I’m the only one who cares about the rules.

Motive, too, is an important element that seems largely overlooked. It’s too early to know exactly what lead these young men to allegedly set off bombs at the Boston marathon. Assuming the remaining suspect survives (as I write this on Saturday morning he’s still with us) the details of his plot will be revealing. There is some speculation as to the role the FBI played in all of this. The aunt of the two suspects indicated the FBI had been involved for as long as three years, and Daniel McAdams raised the question of what role, if any, they played on the LRC blog. These are reasonable questions, considering the FBI was involved in theChristmas Tree bomber, the Newburgh Four, this guy, this guy, and these guys, among many others.

Is it so hard to imagine that at some point these operations could get out of hand, and someone who has been radicalized by the FBI actually pulls off an attack? Fortunately they were able to control those other situations, but had they not been involved in such activities we’d all be better off. It serves no legitimate purpose for them to concoct an attack, spend years molding a patsy into carrying it out, and then come rushing in to save everyone at the last minute.

There is of course blowback as a possible motive, one that seems entirely likely given the long-standing policy overseas. And it could simply be that whoever was responsible for the bombing is someone with sociopathic tendencies. However it turns out to be, the lessons that come from the events in Boston this past week are that the police state we live in is unable to protect the people of this country. Furthermore, the people seem content to live in these circumstances and are actually thankful to do so. Here’s to hoping that at least a few more people saw this for what it really was – totalitarianism – and will begin to question the motives and tactics of those involved.

Joel Poindexter is a student working toward a degree in economics. His writing has been published by the Ludwig von Mises Institute, LewRockwell.com and the Tenth Amendment Center. He lives with his wife and daughter near Kansas City. See his blog. Send him mail.