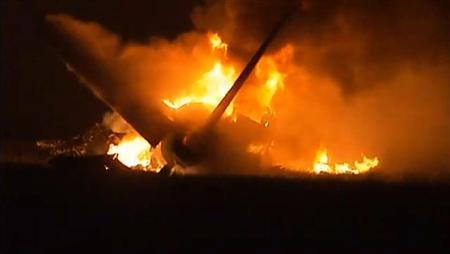 A large UPS cargo plane crashed early Wednesday morning on approach to the airport in Birmingham, Alabama, killing the pilot and co-pilot, the latest in a series of aviation accidents in the United States this year.

“I can confirm they were killed in the crash,” Birmingham Mayor William Bell said of the pilot and co-pilot, who were not identified immediately. He added that there were no other casualties reported.

United Parcel Service Inc flight 1354, en route from Louisville, Kentucky, to Birmingham, crashed at about 5 a.m. CDT (1000 GMT), according to the FAA. The plane was identified as an Airbus A300.

A National Transportation Safety Board response team from Washington was expected to be on the scene in Birmingham by midday.

No distress calls were made to the airport tower, April Odom, a spokeswoman for Bell, said.

A fire in a sparsely populated area that broke out after the predawn crash was “under control” Bell said.

“It was quite a large fire and there were two to three explosions after the plane caught fire, after the crash itself,” Bell said.

A field of debris could be seen around the crash site in an area of Birmingham that had been a residential neighborhood. Many homes have been bulldozed to make room for an airport expansion.

“This incident is very unfortunate, and our thoughts and prayers are with those involved,” said Mitch Nichols, president of UPS Airlines. “We place the utmost value on the safety of our employees, our customers and the public.” UPS is the world’s largest package-delivery service.

‘WAS THAT A PLANE CRASH?’

Sandy McDaniel, 42, was on her shift at a nearby service station when she heard the blast.

“Firemen were in here getting coffee,” McDaniel said. “They jumped and said, ‘Was that a plane crash?’ and then it came on the radio. They ran out.”

The Airbus A300 is a wide-body jet widely used as a regional freighter by UPS, FedEx Corp and others.

Airbus said it was “assessing the situation.”

The Birmingham crash is the latest in a series of air accidents in the United States in recent months.

In July, an Asiana Airlines Boeing 777 crashed while landing in San Francisco, killing three people and injuring more than 180.

In May, a U.S. Airways flight made a belly landing at Newark International Airport in New Jersey after its landing gear failed to deploy. No one was injured.

Boeing has struggled with mechanical problem on its new 787 Dreamliner aircraft. All of the aircraft were grounded for three months earlier this year after battery problems caused a fire in a parked Japan Airlines plane in Boston.

Last month after the 787s were cleared to return to service, another Japan Airlines Dreamliner turned back to Boston Logan International Airport after takeoff due to a mechanical indicator alert.

10 thoughts on “Two dead in crash of UPS cargo jet in Birmingham, Alabama”