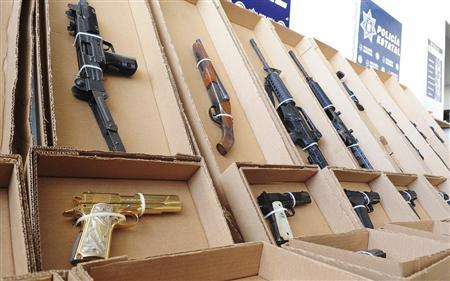 (Reuters) – The 193-nation U.N. General Assembly is tentatively planning to vote on Tuesday on a draft treaty to regulate the $70 billion global trade in conventional arms.

Iran, Syria and North Korea last week prevented a treaty drafting conference at U.N. headquarters from reaching the required consensus to adopt the treaty. That left delegations that support it no choice but to turn to the General Assembly to adopt it.

The Mexican delegation, which has been one of the most ardent supporters of the arms trade treaty, predicted victory if the resolution containing the draft convention is put to a vote in the General Assembly.

Following are questions and answers about the arms treaty.

WHAT IS HAPPENING IN THE GENERAL ASSEMBLY?

To get around the blockade caused by Iran, North Korea and Syria, Britain’s U.N. Ambassador Mark Lyall Grant sent the draft treaty to Secretary-General Ban Ki-moon and asked him on behalf of Mexico,Australia and a number of others to put it to a swift vote in the General Assembly. That vote is expected on Tuesday.

The treaty needs a simple majority – or 97 votes if all 193 member states are present and voting – to pass. Mexico and other supporters of the treaty say they will easily get that and are hoping for something closer to a two-thirds majority.

It is possible that other countries in addition to Iran, Syria and North Korea that criticized the draft treaty last week – including India, Pakistan and Russia – will call for reopening negotiations on the text, but the treaty’s supporters say they will oppose such calls.

The final draft text circulated to U.N. member states last week was the product of years of negotiations.

WHAT IS THE ARMS TRADE TREATY?

The point of an arms trade treaty is to set standards for all cross-border transfers of any type of conventional weapon – light and heavy. It would also create binding requirements for nations to review all cross-border arms contracts to ensure the munitions will not be used in human rights abuses, terrorism or violations of humanitarian law; do not breach U.N. arms embargoes; and are not illegally diverted.

WHICH WEAPONS WOULD BE COVERED?

Some rights groups have complained that the scope of weapons covered in the treaty is too narrow.

It would not cover unconventional weapons like nuclear, chemical and biological arms. Separate treaties cover those.

WHO WANTS SUCH A TREATY?

Human rights groups, arms control advocates and a majority of the U.N.’s 193 member states want a strong treaty that imposes tough new standards on the largely unregulated arms trade. [ID:nL1N0CBCO3] Many of the treaty’s most ardent supporters come from Europe, Latin America and Africa, though it has supporters from all over the world.

Nearly 120 countries, led by Mexico, issued a joint statement on March 18 saying “the overwhelming majority of (U.N.) Member States agree with us on the necessity and the urgency of adopting a strong Arms Trade Treaty. Our voice must be heard.”

Among that statement’s supporters were major arms producers Britain and Germany. The other four top arms exporters – the United States, Russia, China and France – did not endorse it.

The main reason the arms trade talks took place at all is that the United States – the world’s biggest arms trader – reversed U.S. policy on the issue after President Barack Obama was first elected and decided in 2009 to support a treaty.

The United States has said it will vote in favor of the draft treaty, which Washington has stated will do nothing to undermine domestic gun ownership rights in the United States.

WHAT WILL AN ARMS TRADE TREATY NOT DO?

According to the U.N. Office of Disarmament, the treaty will not do any of the following: interfere with domestic arms commerce or the right to bear arms in member states; ban the export of any type of weapon; harm states’ legitimate right to self-defense; undermine national arms regulation standards already in place.

The National Rifle Association, the powerful U.S. gun rights lobbying group, opposes the arms trade treaty. The group has vowed to fight the convention’s ratification by the U.S. Senate if Washington backs it at the United Nations.

The NRA says the treaty would undermine gun ownership rights under the Second Amendment of the U.S. Constitution.

The American Bar Association, an attorneys’ lobbying group, last month disputed the NRA position, saying in a paper that “ratification of the treaty would not infringe upon rights guaranteed by the Second Amendment.”

WHEN WOULD IT COME INTO FORCE?

If approved by the General Assembly, countries will need to sign and ratify it. The treaty will enter into force 90 days after the 50th signatory ratifies it.

WHAT WERE SOME STICKING POINTS IN NEGOTIATIONS?

– Ammunition. Most countries and rights groups wanted ammunition to be covered comprehensively in the treaty. Exports of ammunition are covered in the draft treaty, but not imports. Rights groups say the proposed coverage of ammunition is inadequate but better than nothing.

– Exemptions. There is clause for certain arms deals, known as defense cooperation agreements, to be exempt from the treaty. Several delegates described this as the “India clause,” because it was something India pushed hard for. Rights groups and many delegations dislike the “India clause.”