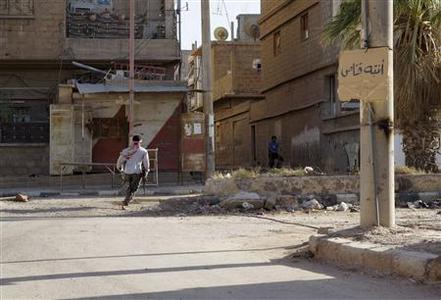 The United States is considering imposing a no-fly zone in Syria, its first direct military intervention of the two-year-old civil war, Western diplomats said on Friday, after the White House saidSyria had crossed a “red line” by using nerve gas.

“Washington is considering a no-fly zone to help Assad’s opponents,” one diplomat said. He said it would be limited “time-wise and area-wise, possibly near the Jordanian border”, without giving details.

Imposing a no-fly zone would require the United States to destroy Syria’s air defenses, entering the two-year-old civil war with the sort of action that NATO used to help topple Muammar Gaddafi in Libya two years ago.

The area near the Jordanian border contains some of the most densely-populated parts of Syria, including the outskirts of the capital Damascus.

Washington has moved Patriot surface-to-air missiles, war planes and more than 4,000 troops into Jordan in the past week, officially as part of an annual exercise but making clear that the forces deployed could stay on when the war games are over.

Syria’s civil war grew out of protests that swept across the Arab world in 2011, becoming by far the deadliest of those uprisings and the most difficult to resolve, with powers across the Middle East squaring off on sectarian lines.

Western countries have spent the past two years demanding Assad leave power but declining to take direct action like that taken in Libya, because of the far greater risk of engaging with a much stronger country that straddles sectarian divides at the heart of the Middle East and is backed by Iran and Russia.

Just months ago, Western countries believed Assad’s days were numbered. But momentum on the battlefield has turned in his favor, making the prospect of his swift removal or an end to the bloodshed appear remote without outside intervention.

Activists reported an intensified assault on parts of Aleppo and its countryside near the Turkish border overnight, sparking some of the most violent clashes in months.

The use of chemical weapons provides a straightforward reason for Washington to intervene. Deputy National Security Adviser Ben Rhodes said Washington now believed 100-150 people had been killed by poison gas.

“Our intelligence community assesses that the Assad regime has used chemical weapons, including the nerve agent sarin, on a small scale against the opposition multiple times in the last year,” he told reporters.

Syria considers the rebels terrorists. Its foreign ministry called the U.S. decision to arm the rebels a “flagrant double standard” in its dealings with terrorism.

Syria’s state news agency SANA said: “the United States affirmed once again its involvement in supporting the armed terrorist groups in Syria by announcing its intention to provide them with greater military aid”.

The implicit threat to openly join the conflict puts Washington on a diplomatic collision course with Moscow, which has used its U.N. Security Council veto three times to block resolutions that might be used to threaten force against Assad.

U.S. officials say Obama will try to persuade Russian President Vladimir Putin to abandon support for Assad. Obama and Putin will meet at a G8 summit in Northern Ireland next week.

The Kremlin did not immediately respond directly to the new U.S. posture but a Kremlin-allied Russian lawmaker said the chemical weapons data was fabricated and that Washington would use it to cook up a justification for joining the war.

“Information about the use by Assad of chemical weapons has been fabricated in the same place as the lies about (Saddam) Hussein’s weapons of mass destruction,” said Alexei Pushkov, head of the foreign policy committee in the lower chamber of the Russian parliament, in a statement on Twitter.

“Obama is taking the same path as George Bush.”

The arrival of thousands of seasoned, Iran-backed Shi’ite Hezbollah fighters to help Assad combat a revolt led by Syria’s Sunni majority has shifted momentum and raised the prospect of sectarian violence spreading across the Middle East.

The United Nations now estimates at least 93,000 people have been killed in Syria and millions driven from their homes.

Western powers have been reluctant in the past to arm the rebels, worried about the rising strength of Sunni Islamist insurgents among them who have pledged their loyalty to the global militant network al Qaeda.

The White House said Washington would now provide “direct military support” to the opposition. It did not publicly specify whether this would include “lethal aid”, which would mark a reversal of Obama’s previous resistance to arming the rebels. But a U.S. official, speaking on condition of anonymity, said the package would include weapons.

Syrian rebels already receive light arms from Saudi Arabia and Qatar. They have asked for heavier weapons including anti-tank and anti-aircraft missiles. European countries, in particular France, have argued that the solution is to provide more weapons for mainstream rebels to marginalize extremists.

U.S. and European officials are meeting the commander of a main rebel fighting force, the Free Syrian Army (FSA), on Friday in Turkey. FSA chief Salim Idriss is expected to plead urgently for more help.

Obama has been more cautious than Britain and France, which forced the European Union this month to lift an embargo that had blocked weapons for the rebels. French officials already said a week ago that they had firm proof Assad used nerve gas, while Washington continued to say it was unsure until Thursday.

NATO Secretary-General Anders Fogh Rasmussen welcomed what he said was a “clear U.S. statement”. “The international community has made clear that any use of chemical weapons is completely unacceptable and a clear breach of international law,” Rasmussen told reporters in Brussels.

Syria is not a signatory to the international treaty that bans chemical weapons but has said that it would never use them in an internal conflict. It has accused the rebels of using them, but Washington said it does not believe that the insurgents have access to them.

The move sparked some of the fiercest battles in months. Activists also reported artillery and air strikes in the rebel-held countryside in the north of the province.

Syrian state media have been touting plans for “Northern Storm,” a looming campaign to recapture the rebel-held north.

Aleppo would be a far more difficult target than Qusair. Assad’s forces only hold a few routes and pockets of territory in the province, mostly in isolated Shi’ite villages.

Assad’s main advantage so far has been the ability to use air power to resupply troops and bomb rebel areas, along with its use of long-range missiles. But Western support or a no-fly zone would change the current balance of power.