U.S. to free up Ebola funds as fears of global spread rise 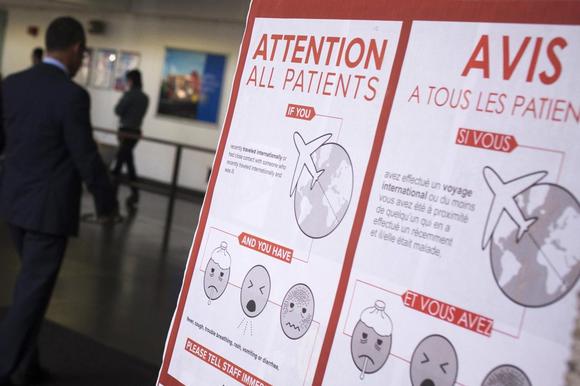 U.S. lawmakers agreed to use $750 million in war funds to fight Ebola in West Africa and seven more people in Spain were admitted to the hospital where an infected nurse lay seriously ill on Friday, as global concern grew about the virus spreading.

Countries from Macedonia to the Czech Republic to Brazil dealt with a rash of unlikely cases while Europe, the United States and the United Nations focused on trying to contain Ebola, which has killed thousands in West Africa.

The death this week of the first person diagnosed with Ebola in the United States and the hospitalization in Spain of a nurse who was the first to contract the virus outside West Africa has changed the perception of Ebola to a global threat from what previously had been seen frequently as a local, African problem.

A top U.N. official said response to a $1 billion funding appeal had been slow and that a surge in trained healthcare personnel was needed to tackle the crisis in Liberia, Sierra Leone and Guinea.

“Of the $1 billion sought by U.N. agencies…consolidated appeal, only one quarter has been funded,” Deputy Secretary-General Jan Eliasson told a U.N. General Assembly briefing on the Ebola outbreak.

European Union health ministers called an extraordinary meeting for Brussels on Oct. 16 and bolstering airport procedures to better screen passengers arriving from countries affected by the disease will be discussed, said a statement from Italy, which holds the rotating EU presidency.

“The goal is to further increase the ability to respond to the ongoing epidemic and further reduce the risk of contagion in Europe,” the statement said.

In Washington, Republican U.S. Senator James Inhofe said he has approved a shift of $750 million in Defense Department war funds to fight Ebola in West Africa, lifting the final objections to that amount in Congress.

Inhofe, the top Republican on the Senate Armed Services Committee, said the administration of President Barack Obama had failed to plan in advance for the U.S. response in the region. “It will be difficult for me to support any further last-minute funding requests using military resources. That is why I have insisted another more appropriate funding source be identified for operations beyond six months.”

The World Health Organization on Friday updated its death toll for the worst Ebola outbreak on record to 4,033 people out of 8,399 confirmed, probable, and suspected cases in seven countries by the end of Oct. 8. The death toll includes 2,316 in Liberia, 930 in Sierra Leone, 778 in Guinea, eight in Nigeria and 1 in the United States. An unrelated Ebola outbreak in Democratic Republic of the Congo has killed an additional 43 people.

The Spanish nurse, Teresa Romero, was infected in the hospital as she treated two Spanish missionaries who had caught the haemorrhagic fever in West Africa. She remained undiagnosed for days despite reporting her symptoms. Prime Minister Mariano Rajoy, facing recriminations from labor unions over the health system, said it was extremely unlikely that the disease would spread in Spain.

“Our first priority is Teresa Romero – she is the only person that we know has the illness,” he told reporters on the steps of the specially-adapted Carlos III hospital, surrounded by medical staff. A hospital spokeswoman said 14 people were now under observation or being treated, including Romero’s husband.

The Ebola virus causes hemorrhagic fever and is spread through direct contact with body fluids from an infected person, who would suffer severe bouts of vomiting and diarrhea. About half of people infected have died in the current outbreak, although up to 90 percent of patients have died in previous outbreaks.

Cocoa futures on ICE rallied more than 3 percent on Friday as worries intensified over the potential impact of Ebola on supplies from West Africa.

Meanwhile, growing awareness of the disease and accompanying fears have led to several people being tested as a precaution.

Doctors in Macedonia have “serious indications” that alcohol, not Ebola, may have killed a British man visiting the Balkan country, a senior health official said. Brazil’s health minister said doctors were testing a man from Guinea but he was in “in good shape” and his slight fever has subsided. Tests showed a hospitalized Czech man, who had recently traveled to Liberia, does not have Ebola, officials said.

(Reporting by Sonya Dowsett in Madrid, Michelle Nichols at the United Nations, David lawder in Washington, Steve Scherer in Rome and Tom Miles in Geneva; Writing by Grant McCool)

One thought on “U.S. to free up Ebola funds as fears of global spread rise”