So, Diane Frankenstein’s assault weapons ban has been squashed and the lullaby has begun, but I would not recommend falling asleep at this particular moment as the removal of the legislation from the main body of the gun confiscation legislation is not but a ploy.  It has been my opinion that the proposed assault weapons and clip ban have been nothing more than a diversion put forth in the expectation that we 2nd Article supporters will consider it a victory when universal background checks become a reality.

We can make no mistake as to the communists’ intent as they have made that intent clear many times over.  They want the American people disarmed.  But how do they achieve this insurmountable goal?  We must consider the larger picture, which is complete disarmament of the American people via UN dictate.

In 1913 the Federal Reserve Act was passed in the middle of the night, with a quorum of a handful of Senators committing the treason.  Had the people of our nation been informed and aware as to the ramifications of the act, it wouldn’t have happened.

It seems the main sticking point at the moment with the UN Small Arms Treaty is centered on the international control of ammunition production, sales, distribution, and possession.  Ammunition is a consumable commodity and as sure as our bodies can be starved for food as an incentive for compliance, our guns can also be starved for ammunition to take away our ability to resist.

How about this for a scenario?  Universal background checks/universal registration is passed, a victory for the 2nd Article of our Bill of Rights.  Meanwhile, the UN Small Arms Treaty is passed with the ammunition controls.  But not to worry, the Senate would have to ratify the treaty.  They wouldn’t do that.  And then one night, when all attention is directed elsewhere, a handful of Senators form a quorum and ratify the treaty.

The people rise up in righteous indignation and those who do are immediately labeled as mentally disturbed and begin being disarmed as quickly as they can be identified.  This will be accomplished via the legislation that was considered a victory.  And while we are all busy keeping our mouths shut about the UN ammunition grab so that we’re not marked for confiscation, the UN Treaty is enforced, allowing us to be gradually starved of ammunition until our guns are worthless to us.

The communists have set a high mark and can only expect to achieve their goal through brutality imported from foreign shores.  In short, hold on to your ammunition and be prepared to declare yourself one of the crazies when the time comes.  If we treat this like we have every other affront, it will fail. 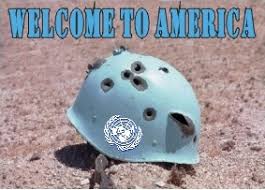 We must declare universal background checks unacceptable and if the NRA tries to say otherwise, we must declare them unacceptable.  We must let these traitors within know that acceptance of any infringements coming out of the UN will immediately result in a conviction in absentia for high treason, which means their last waltz will be at the end of a hemp rope, as we will not waste any of our precious ammunition on them that we are going to need to put holes in those powder blue combat helmets.