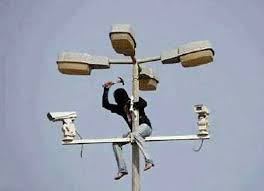 Update on CAMOVER which I went over here.

A group calling itself the Barefoot Bandit Brigade, Puget Sound, Washington has claimed the destruction of 17 Police State cameras.  This is by far the greatest number of cameras I know of destroyed, in the U.S., so they are in the lead for the America’s.

They said on their site; “This act is concrete sabotage against the system of surveillance and control. It is also a message of solidarity and a wish of strength to the Seattle Grand Jury Resisters, those currently incarcerated and those not. Finally, this act announces our participation in the game of CAMOVER, called for by comrades in Germany.”

Glory to the Barefoot Bandits of Seattle.  What have you done for liberty?  I am of course completely opposed to any destruction of equipment that allows the government to illegally and unconstitutionally watch our every move without cause.  Of course completely opposed. I am not saying the Barefoot Bandit Brigade are men and women who have done something, taken risks and acted and great honor and respect on them.  No I am not saying that at all. Just saying if more stuff started showing up with the key words CAMOVER it would be a lot easier to find and share.  Just saying.