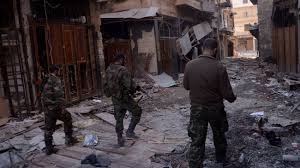 A political analyst tells Press TV that the Free Syrian Army is a subsidiary of the CIA and they want to destroy Syria and it is obvious they do not care for the Syrians.

This is while the United States has updated its military options for a direct intervention in Syria to aid the militants fighting against the government of President Bashar al-Assad.

Press TV has conducted an interview with Randy Short, human rights activist, to further discuss the issue. What follows is an approximate transcription of the interview.

Press TV: What exactly are the so-called Friends of Syria after? I mean are they really concerned about the plight of people in Syria?

Short: Of course they are not concerned. If you ask me the FSA or the Free Syrian Army or whatever, they are a subsidiary of the CIA. Some people call the CIA the cocaine importing agency in terms of its relationship to drugs coming into the United States from Afghanistan and other places.

There they are to destroy a strong secular Muslim society that has shown itself a leader to fighting against the excesses of Zionism as well they want to punish the people of Syria who quietly helped resist the American invasion of Iraq and as well have preserved Lebanon, preventing it from becoming a colony of Israel.

This is a crime of the Assad dynasty, they can’t be forgiven as if they dare to want to have their own path, their own chart and the FSA and the others who they are to hide behind Saudi Arabian Wahabi Islam which is basically working with Zionism and European and American imperialism, racism and Islamophobia in the world.

They want to destroy Syria. It is obvious they do not care anything for the people. And most of the fighters, 95 percent according to German Intelligence are not even Syrians.

So I mean how can people who come into a country invade and destroy infrastructures, kill children and desecrate Masjids and profane the [Prophet] Muhammad (Peace be upon Him) and kill Imams, how can they really before anything other than covert Zionistic attack on the people of Syria?

Press TV: Mr. Short, I’d like to pick up on your mention of Israel there. You know, none of the so-called Friends of Syria have any problems with Israel, indeed some of them are allies and supporters of Tel Aviv. So what then is the role of Israel in this war on Syria?

Short: Of course, to throw rocks and hide their hands, to do things like have a role in assassination of leaders in other countries and try to attribute it to a third source, black flag operations or false flag operations seem to be the hallmark of not just Israel but the United States and Europe, the European Union with Operation Gladio or for that matter many people here suspect 9/11 and somehow is some sort of false flag operation.

And so there is a false flag that people care about the freedom of Syrian people. If they did, they wouldn’t be killing them, executing people and marking their bodies on YouTube, I cannot even watch it. How can such people care about Syrians?

And caring about Syrians you can’t just care about the Sunni majority. You have to think about the Bedouin, the Shia, the Kurds, the Christians, I mean Syria is a complex society, you cannot really care about a nation and only like some of the people.

That is the problem we have in United States as you know, I am an expert on that.