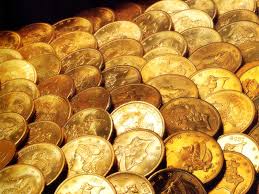 The U.S. Mint in April has sold 153,000 ounces of American Eagle gold coins, the highest in almost three years, after futures prices started the week by plunging the most since 1980.

Sales have more than doubled from March and surged sevenfold from a year earlier, data on the Mint’s website showed. The amount for all of May 2010 was 190,000 ounce.

This week, retail sales and jewelry demand soared in India, the world’s top gold buyer, and China, the second-biggest, after futures in New York slumped into a bear market, touching the lowest in more than two years. Coin sales also surged in Australia.

“Sales for coins have jumped this week,” Raymond Nessim, the chief executive officer of New York-based MTB Inc., a dealer authorized to purchase coins directly from the U.S. Mint, said in a telephone interview. “The price drop has definitely given a big push to sales.”

The China Gold Association said that retail sales soared on April 15 and April 16, and the All India Gems & Jewellery Trade Federation said that demand climbed to the highest this year. Sales surged from Australia’s Perth Mint, which refines almost all of the nation’s bullion, Treasurer Nigel Moffatt said. He didn’t provide precise figures.

“The volume of business that we’re putting through is way in excess of double what we did last week,” Moffatt said in a telephone interview. “There have been people running through the gate.”