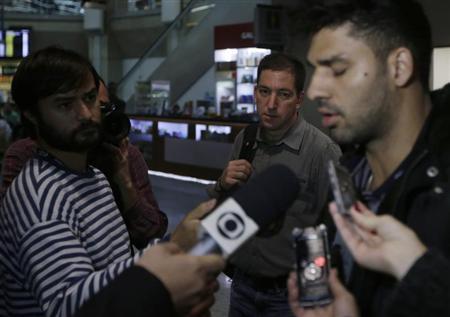 British authorities came under pressure on Monday to explain why anti-terrorism powers were used to detain for nine hours the partner of a journalist who has written articles about U.S. and British surveillance programs based on leaks from Edward Snowden.

Brazilian David Miranda, the partner of American journalist Glenn Greenwald, was detained on Sunday at London’s Heathrow Airport where he was in transit on his way from Berlin to Rio de Janeiro. He was released without charge.

“The detention of David Miranda is a disgrace and reinforces the undoubted complicity of the UK in U.S. indiscriminate surveillance of law-abiding citizens,” Michael Mansfield, one of Britain’s leading human rights lawyers, told Reuters.

“The fact that Snowden, and now anyone remotely associated with him, are being harassed as potential spies and terrorists is sheer unadulterated state oppression,” he wrote in an email.

Miranda was detained under Schedule 7 of the Terrorism Act 2000, which allows police to stop and question people travelling through ports and airports to determine whether they are involved in planning terrorist acts.

The opposition Labor Party urged the authorities to explain how they could justify using Schedule 7 to detain Miranda, arguing any suggestion that anti-terrorism powers had been misused could undermine public support for those powers.

The Home Office, or interior ministry, said the detention was an operational police matter. The police declined to provide any details beyond confirming the detention.

“Schedule 7 forms an essential part of the UK’s security arrangements. It is for the police to decide when it is necessary and proportionate to use these powers,” a Home Office spokesman said.

Keith Vaz, a Labor lawmaker who chairs parliament’s powerful interior affairs committee, told the BBC he had written to the head of London’s Metropolitan Police to ask for clarification of what he labeled an “extraordinary” case.

Miranda was detained for the maximum nine hours allowed by the legislation, which is extremely rare.

According to Home Office statistics, fewer than three out of every 10,000 people passing through British borders are stopped under Schedule 7. Of those, more than 97 percent are examined for less than one hour, while 0.06 percent are held for six hours or more.

Brazil has said Miranda’s treatment “has no justification”.

Greenwald, who is based in Brazil and writes for Britain’s Guardian newspaper, said the detention of his partner was a “despotic” attempt to intimidate him and others involved in reporting on British and U.S. surveillance programs.

“They completely abused their own terrorism law for reasons having nothing whatsoever to do with terrorism,” he wrote in a column in the Guardian, adding that Miranda was given no access to a lawyer.

“If the UK and U.S. governments believe that tactics like this are going to deter or intimidate us in any way from continuing to report aggressively … they are beyond deluded.”

He has published a series of articles based on documents leaked by Snowden, the former U.S. National Security Agency contractor who faces criminal charges in the United States but has been granted temporary asylum in Russia.

Schedule 7 has been under official review, with a public consultation published in July showing that 71 percent of respondents thought the detention time-limit of nine hours was excessive. The government plans to reduce it to six hours.