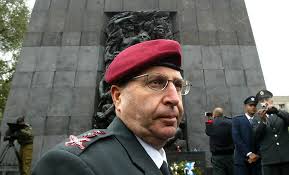 History as it Happened – by Damian Lataan

Moshe Ya’alon, an ex-Israeli Chief of Staff and now Member of the Knesset, has been appointed Israel’s Minister of Defense in Netanyahu’s latest government coalition. Ya’alon replaces Ehud Barak.

Ya’alon was Chief of Staff of the IDF in July 2002 when Palestinian activist Salah Shehade was murdered in the Gaza Strip by a one tonne bomb dropped by an Israeli Air Force F-15 jet. Fourteen Palestinian civilians were also killed in the attack.

In 2005 a group of relatives of victims of the 1996 Israeli shelling of the Lebanese town of Qana, where some 106 civilians died, filed a suit demanding a jury trial against Ya’alon in Washington DC. Predictably, the case went no further. A year later in 2006 Ya’alon was visiting New Zealand on a fund-raising trip when an Auckland court issued a warrant for his arrest on charges relating to the Gaza Strip deaths. The warrant was over-ruled by New Zealand’s Attorney-General and Ya’alon was able to return to Israel. Then in October 2009 Ya’alon was forced to cancel a trip to the UK for fear of being arrested on war crime charges, again relating to the 2002 killings in the Gaza.

This man, who is pro-settlement, stridently anti-Iran, and fervently against the existence of any kind of Palestinian state, will be Israel’s next Defense Minister. This war criminal will probably be shaking President Obama’s hand when the President visits Israel next week.

No doubt more crimes will be planned when they meet.