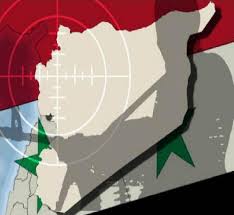 “While the Syrian regime has reduced the number of foreign fighters bound for Iraq the regime’s brutal war on the Syrian people, who have been calling for freedom and a representative government, endangers not only the Syrian people themselves but could yield greater instability throughout the region…” – Joe Novotny (Reading Obama’s Statement)

(AE) – So the US is blaming Syria for possible “greater instability throughout the region”????… what unbelievably hypocritical trash.

Obama claims Syria was, and still is (!!), sending foreign fighters into Iraq?????

Hold on… these foreign terrorists were called “Al Qaeda in Iraq”, and they are the exact same foreign mercenaries now being armed, financed, supported, and transported, by NATO and the Gulf State Monarchies… to attack Syria!!!!

Syria has NEVER supported Al Qaeda… Al Qaeda has always been a CIA & MI6 operation, or as I prefer to call them, “NATO’s Swiss Army Knife”.

One thought on “War on Syria; Obama Extends US ‘State Of Emergency’ Over Syria, Blames Victim He’s Attacking To Justify ‘Emergency Powers’”