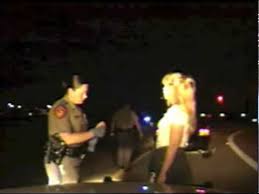 Police in Texas have been caught conducting completely warrantless vaginal searches of women on the side of freeways.

Yes, you read that correctly.

After watching the videos, which were taken by police car dashboard cams, it is painfully obvious that police were confident that the women did not have marijuana — but they went ahead with the cavity searches anyways.

The women in the first video was pulled over for speeding. Pretty standard traffic stop, right?

Not in this case.

The male cop became convinced that the women in the car were hiding drugs in their private areas. He called a female officer over to help him and told the women, “I ain’t about to get up close and personal with your woman areas.” The footage shows the shocked woman driver’s facial expression as she is intimately searched.

The two women involved in the incident, Alexandra Randle and Brandy Hamilton, have filed a suit.

Another video shows a woman being pulled over for throwing litter out her window. She is asked if she has marijuana in the car, to which she responds negatively. Still, the cop is convinced the woman is lying. Like the first officer, he calls a female cop to the scene. The female officer puts a latex glove on, and then puts her hand down the woman’s pants. She told the driver if she had “hid something in there, we are going to find it.”

The footage is shocking.

Police have been granted a large amount of discretion and latitude from the Supreme Court, when it comes to roadside searches. That is, if they have a reasonable cause to think there are illegal drugs in the vehicle.

In both of these Texas cases, there seems to be no reasonable cause whatsoever.

In 2009 the Supreme Court ruled that citizens have a Constitutional expectation of privacy. In the Safford Unified School District v. April Redding case, the majority ruled, “Subjective and reasonable societal expectations of personal privacy support the treatment of such a search as categorically distinct, requiring distinct elements of justification on the part of school authorities for going beyond a search of outer clothing and belongings.”

It is unfortunate that we now live in a society where our Constitutional rights are violated on a regular basis.

What are your thoughts on these warrantless cavity searches? Let us know in the comments section below.

Kristin Tate is a multi-media journalist. She previously worked under John Stossel at Fox Business, and with guerilla journalist James O’Keefe. Tate was a Young Americans for Liberty (YAL) Chapter President and Founder in Boston. She has been heavily involved in the libertarian movement, campaigning for notable candidates like Ron Paul and Thomas Massie. She will continue to fight tirelessly for individual liberty and free markets through journalism and new media.