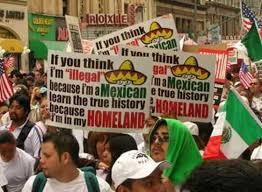 The Immigration Bill being put forth by the so called Gang of Eight can be considered nothing short of a US surrender to Mexico and the North American Union.   We are told that there are 11.2 million illegals in our country and that they are here because our Executive Branch has refused to enforce the laws legislated by the US Congress, hence the representatives of we the people.

When we tell our government to enforce our law and get the foreigners out as they are destroying our economy through their draw on our safety net and all other public services, the socialist insurgents within our government tell us that these invaders cannot be removed because it is cost prohibitive at $60 billion to remove these trespassers and secure our border.

Now this same bunch of fraudulent actors are proposing legislation that they tell us it will cost $6.3 trillion in order to hand over a substantial portion of our country to these foreigners.

That little two faced, forked tongue, second generation Cuban-Socialist-American, Marco Rubio truly believes the American people to be dumber than dirt or more cowardly than the Lion from Oz.  He says that his fellow invaders won’t get a thing until they fill out the proper papers and meet the proper requirements.

Correct me, Marco, if I’m missing something here, but haven’t we already been paying for them every step of the way?

Have we not paid for their food through food stamps which are advertized down in Mexico?

Have we not paid for the births of their children through our hospital system that cannot refuse them nor report them for being illegal?  And if they did report them, our immigration officers are forbidden to arrest them and charge them with the felony they are committing.

Have we not provided education from pre-school through college?

Have we not been providing them public housing, in fact giving them a preferred status to step in line in front of American nationals at every instance, as not only do these criminals enjoy everything afforded to an American national but they actually have a super-citizen status here as an Hispanic minority, which if the truth were told, is on the apex of becoming the majority?

This foreign invasion has already cost us trillions and the only remedy we are being offered is to pay trillions more, which we know will become tens of trillions more, and accept the invasion.  They are not going to stop coming.  Why should they, is the government just going to start obeying and enforcing the law all of the sudden?

I am just one individual American out here, but as for me, I say spend the $60 billion and get these foreign nationals out of my country…yesterday, and send the Gang of Eight with them.

Just another episode of blatant, in-your-face treason on just another day in America.

11 thoughts on “Washington Surrenders the United States to Mexico”