If you are like me, these past months, if not these past few years, you have been constantly asking yourself the question of “Why are we training Russian troops in the U.S. under the guise of the UN when we are supposed to be fighting against them in the Middle East”? It makes ZERO sense. And no one has been able to acknowledge it or answer it or maybe they are just too distracted with other immediate propaganda and scandals that are happening within our government and around the world.

I, for one, like to look at all sides and try to come up with a bigger picture much like the psychopaths in our government try to do. They want you to focus so much on one thing, that you fail to grasp how it applies to everything else overall.

With anything that is happening, no matter how small, we must ALWAYS take a step back and try to figure out how it fits into the greater scheme of things. In order to do that, yes, we must all stop with the slothfulness and do our own research and try and come up with our own conclusions. It is by doing this that we set ourselves down different rabbit trails (as Henry Shivley likes to call them) which open up new doors and new ways of thinking that we never thought possible. It may lead us to more questions but that is the beauty of it all. We must question everything until those questions are answered logically, accurately and appropriately. However, sometimes it also means thinking like a psychopath in not just our government, but any government around the world, since we all know they are the ones pulling the strings.

We must also look at history and other doctrines in order to figure out where this all may be leading to, for as we all know that those who fail to understand history are doomed to repeat it. If we find that it leads us to death and destruction, we must do all that we can to expose the evil and put a stop to it before it happens. It is not because we are a teacher, a veteran, a parent or even an American, but because it is a MORAL IMPERATIVE and our duty as human beings!

Morals are lacking these days and need to be re-instated in order for our country and for our world to survive and stabilize. Without them, countless acts iniquities will befall on all of us like they are happening now in our very own country in Police State Amerika.

So let’s get back to the Russian dilemma and why I am writing this article. We see that in the Middle East and even in our own country, Russia led by Putin, is increasingly turning out to be the good guy in these wars that the U.S. is trying to initiate with Syria and eventually Iran. But nothing could be further from the truth. BOTH Putin and Obama are puppets in the same game led by their Communist/Zionist masters. Each has their own role in the game and whoever wins, WE THE PEOPLE LOSE! Both must be expelled from our country if it is to survive.

We now have 91% of the people who oppose any Syrian intervention and the only ones who wish to go to war are the political members of our corrupt government who clearly don’t represent the people and only represent the Zionists. They are told by their insane Zionist masters to do their bidding in order to continue with their plans for a one world government.

That being said, the governments around the world are trying to get everyone to believe that Americans have no control over their government anymore. They also understand that the American people want no part of their government, so the UN and governments from the around the world feel that we somehow need help in abolishing our own government. As though we are too weak and afraid or as though our own corrupt government has put so much fear in us that we cannot possibly defend ourselves and that only outside International assistance can save us from these treasonous criminals seated in government positions.

So we have countless RT stories (Russian news) posted everywhere, even in the alternative media, showing us Americans how our government really is and this somehow makes us want to cling to Russia and see them as the good guys and saviors and that we should ally ourselves with them. I am telling you now that if you do that or even think that, you are DEAD WRONG!

Putin is NOT our friend. He does NOT want to help us and he only cares about working with Obama to implement the elite’s NWO/UN Global Government.

Right now, he basically leads the UN as controlled opposition and is seen as the pacifier rather than the aggressor, while Obama is seen as the opposite. But I must reiterate. If you even so much as allow Russia to be our allies, you are in for impending doom and playing right into the Globalists demands.

A couple of days ago there was a story posted called,

Russia Wants to Talk to US Congress About Syria

Why are we promoting Russia to handle our own affairs now? Did we even ask for their help? And why the hell would we allow a Communist to help us overthrow another Communist? Are we back to the lesser of two evils philosophy again?

Allow me to explain:

Obama and our psychopathic government want to overthrow Syria when the people clearly do not (91% clear). So since we know that Russia is trying to stop Obama, we have this overwhelming urge to support him as an ally and rally around him. This is especially true, since he is protecting our wonderful whistleblower Snowden and all other alternative media journalists and so on. 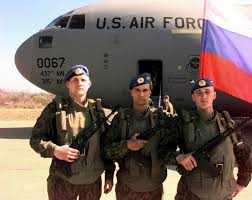 However, way before these incidents even occurred, we have seen Russian troops building up and training on our soil for the past few years, almost as though they were setting our country up for this very moment, and all under the support and authorization of Bush Jr. and Obama and their DHS cronies. Treasonous beyond belief!

So, if Obama attacks Syria, the Russians will attack and since they know that the people don’t support Obama, in comes Putin and Russia to the rescue and are already conveniently in our own country, ready to assist in expelling the traitors in our government as allies to our cause.

Oh! Now I get! I guess that’s what they were here all this time. Wait! What? So our treasonous government was playing both sides all along?

I see a Star Wars: Episode I, II and III going on here in the world and in the U.S. We have Obama playing the part of Count Dooku creating his storm droid army aka DHS/Al-Qaida and proxy separatist groups, while the UN becomes the Federation or the Grand Army of the Republic.

“Count Dooku: I have good news for you, my lord. War has begun.

Darth Sidious: Excellent. Everything is going as planned.”

(Star Wars Episode II: The Attack of the Clones)

Like any allies, if you think that after Russia is done helping us expel our government, Putin will give up his power and remove his troops from the U.S., you are gravely mistaken, yet again!

Did Emperor Palpatine from Star Wars relinquish his power after he became the Emperor of the Republic? HELL NO! So what makes you think Putin and his Russian troops will?

After the removal of our government, he will most likely try and force We the People to submit to a UN government for the greater good and thus fulfill the elite’s goal of implementing their NWO/One world global government.

It is IMPERATIVE that we do not seek any international help or any help from Russia for that matter. We MUST remove our treasonous government ourselves if we are to take back our country. No one else can do it for us. If Russia wants to send weapons and aid to us, then fine. But the minute they or the UN step foot on our soil or even show up on the streets, the gloves will be taken off and they will be targeted as our enemies. Blue helmets will look just as good on my shelves as Russian ones.

I mean think about it. We are 300 million people against maybe 10,000 traitors in our corrupt government, if that. What in the world makes us, or anyone for that matter, even begin to think that it we need to get someone else or some other country to do our fighting for us? That’s like saying a group of 100 highly trained marines can’t handle one simple office clerk. If that is true, then what in the hell is wrong with us?

Are we that damn lazy? Are we that weak? Are we a bunch of cowards? Are we so psychologically messed up that we are afraid to put ourselves on the line when it counts?

Is this the kind of attitude that we want to portray to the rest of the world? Is this what our Founding Fathers fought so hard for? So we can just let some other country kick out our government for us? I sure as hell won’t let that happen. NOT on my watch! I will NOT let our Founding Fathers die in vain!

It is this reason why I am calling on all members of alternative media outlets and journalists in the U.S. to urge everyone to reject Russian, UN or any International assistance.

I’ve said it before and I’ll say it again, this is OUR country! This is OUR land!

If they even think of intervening in our affairs, they better get ready to feel the strength, wrath and power of American people once again!

I urge all Americans to stand up, unite and fight! Rise up and take back your country and your freedom! Like our founding fathers before us, stand up and fight for your survival and for the survival of our future generations because, unfortunately, it’s at the point now where that is all we have left!

Death to the New World Order and may the UN crumble to pieces!