When Truth Is Suppressed Countries Die 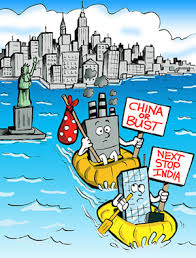 Over a decade during which the US economy was decimated by jobs offshoring, economists and other PR shills for offshoring corporations said that the US did not need the millions of lost manufacturing jobs and should be glad that the “dirty fingernail” jobs were gone.

America, we were told, was moving upscale. Our new role in the world economy was to innovate and develop the new products that the dirty fingernail economies would produce. The money was in the innovation, they said, not in the simple task of production.

As I consistently warned, the “high-wage service economy based on imagination and ingenuity” that Harvard professor and offshoring advocate Michael Porter promised us as our reward for giving up dirty fingernail jobs was a figment of Porter’s imagination.

Over the decade I repeated myself many times: “Innovation takes place where things are made. Innovation will move abroad with the manufacturing.”

This is not what corporations or their shills such as Porter wanted to hear. Corporations were boosting their profits by getting rid of their American employees and replacing them with lowly paid foreigners. Porter’s job was to reassure the sheeple so that no outcry would materialize against the greed that was hollowing out the US economy.

Now comes a study conducted by 20 MIT professors and their graduate students that concludes on the basis of the facts that “the loss of companies that can make things will end up in the loss of research than can invent them.” http://www.manufacturingnews.com/news/mit0305131.html

I am pleased to be vindicated by MIT. Of course, the professors are too late. The loss has already occurred. Nevertheless, it will be interesting to see if the MIT professors can be heard through the orchestrated disinformation.

Two years ago in 2011 a Nobel prize-winning economist, Michael Spence, confirmed my decade-old conclusion that the US economy no longer had the capability to create any jobs except low-wage domestic service jobs that do not produce tradable goods and services that can be exported to reduce the massive US trade deficit. Spence validated my argument that the “new economy” was the offshored economy. Spence concluded that the outlook for the US economy and US employment is dire. The US faces “a long-term structural challenge with respect to the quantity and quality of employment opportunities in the United States. A related set of challenges concerns the income distribution; almost all incremental employment has occurred in the non-tradable sector, which has experienced much slower growth in value added per employee. Because that number is highly correlated with income, it goes a long way to explain the stagnation of wages across large segments of the workforce.” http://www.cfr.org/industrial-policy/evolving-structure-american-economy-employment-challenge/p24366

There has been no more public policy response to Spence’s conclusion than to my identical conclusion.

We have heard all our lives that ideas are the most powerful force and prevail over material interests. Perhaps this was once true, but that would have been in previous times when material interests did not control the media, the universities, and the publishing companies along with the government. Voices such as mine, that of a high US Treasury official, and that of Spence, a Nobel prize winner, cannot compete with the voices paid by Big Money. Today the bulk of the population knows nothing except the propaganda fed to them by the oligarchic interests. They sit in front of Fox News or CNN and ingest it all. Those who fancy themselves more sophisticated get the same dose of lies from the New York Times.

If those who speak truth cannot be bought off or shut up, they are ignored or demonized. Almost everything Americans need to know is off limits in public discussion. Anyone who broaches the truth becomes an “anti-American,” a “terrorist sympathizer,” a “commie-socialist,” a “conspiracy theorist,” an “anti-semite,” a “kook,” or some other name designed to scare Americans away from the message of truth.

The corrupt corporations, the corrupt media, and the corrupt US government have insulated the country from truth. The result will be a massive crash. A country built on lies is like a house built on sand:

One thought on “When Truth Is Suppressed Countries Die”