Why is Police Photographer Sean Murphy under attack for Releasing Photos of Boston Bomber Suspect? 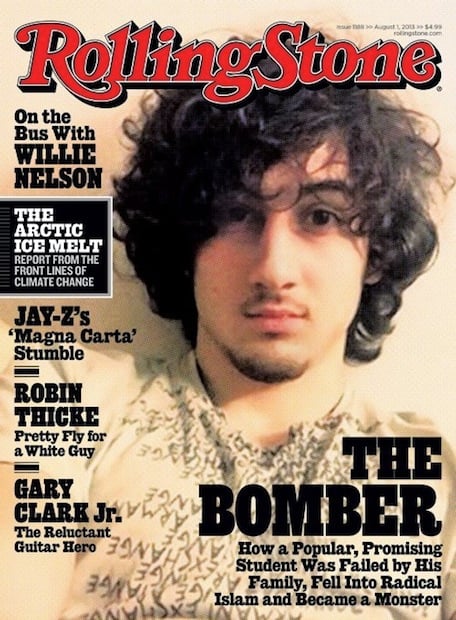 The front page of Rolling Stone’s August edition features a photograph of Dzhokhar Tsarnaev being portrayed in the mode of a rock star.  The photograph has been causing quite a controversy as Dzhokhar Tsarnaev has already been convicted in the mainstream media and any depiction of him as anything other than a maniacal psychotic bomber is seen as a threat to that narrative.

The mainstream propagandists immediately attacked Sergeant Murphy.  This attack was followed by an internal investigation of Sergeant Murphy, the theory being that the photos he released might damage the prosecution of Dzhokhar Tsarnaev.  And of course the mainstream immediately concentrated the narrative for the incident to center on the release of the photos rather than the content, in essence, attempting to redirect the focus of the sheeple from the tree to the forest.

So what exactly am I saying?  Well just look at this photo.  This is Dzhokhar Tsarnaev with his hands up, surrendering.  You say, “And?”  Well look at his throat.  I think this photo proves Dzhokhar Tsarnaev did not shoot himself in the throat as was reported by the mainstream media and that his vocal chords were either severed by an individual on the scene after his arrest or by doctors in the hospital after he arrived.

I think this would definitely affect any prosecution of Dzhokhar Tsarnaev, as the reality of this situation puts forth implications paramount to a bad movie.

Was Dzhokhar Tsarnaev working for the Zionist CIA?  Was he sacrificed as a scapegoat when the drill taking place in Boston and the operatives with the backpacks conducting that drill was revealed in the alternative media?  Were his vocal chords severed to silence him?  If his hands are chained, as they will be until he disappears into a dungeon, will not these diabolical psychopathic Chekists have silenced the truth?

No doubt we will never hear the truth in this situation as the two patsies have been silenced absolute, one via a bullet to this head and the other by having his vocal chords severed.  Look at the pictures again and submit to the reality that these are the people who want to disarm you and make you defenseless against them.

13 thoughts on “Why is Police Photographer Sean Murphy under attack for Releasing Photos of Boston Bomber Suspect?”