World War III, Them, You, and Me 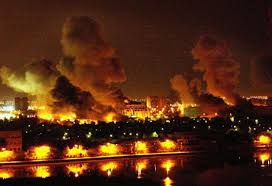 It has been ten years since the United States invaded Iraq for the sole purpose of changing that country’s regime and turning its resources over to the Zionist state of Israel.  We all saw the pictures of Bagdad as the United States opened up with weapons of mass destruction, citing the lie of a nuclear threat as just cause to bomb what was the most modern country in the Middle East back to the Stone Age.

122,000 innocent men, women, and children murdered and look at the country today – car bombings, secular murders, pain, and fear.  Don’t forget that once the lie of the weapons of mass destruction was revealed, the mission statement was changed to “We are freeing the people of Iraq so that they might know peace and happiness under democracy.”

Afghanistan we invaded under the guise that terrorists were training in their country.  Again, death and carnage for ten plus years upon the people of Afghanistan and Pakistan and what was the real reason?  To shut down the Taliban who had shut down opium production.  Massive death and suffering for a flower.

Libya, a rich country about to become a lot richer:  Once again an invasion for nothing more than regime change and to protect the petro dollar from any competition from the gold dinar.  Again, the people of Libya are being put through hell after being bombed back into the Stone Age under the guise of doing the right thing for them.

Today we see our own country falling victim to the same Zionist fraud as the international socialist traitors within seek to divide us that we might slaughter one another in a civil war, designed to leave our country and the rest of the world in chaos that we might accept a one world government, a new world wherein 99% of the population accepts servitude to the 1% international elitist Zionists that have declared themselves gods upon the earth and the rest of humanity as a waste product needing of disposal.

We are heading into dangerous times as the Zionists become more exposed every day.  They are now becoming desperate and to say they are capable of murder would be downplaying the situation.  The enemies of humanity are already slaughtering us wholesale using eugenics and vaccines.  Yet there are just so many of us on this planet that the program for our destruction must be escalated, and soon, as the threat to globalist domination has become real in the eyes of our enemy.

Expect to see in this next year an effort towards population reduction coming from a hundred different angles.  When we do act against our enemies, we had better do so with an emphasis on immediately gaining intelligence as to the implements that are to be used to destroy us and the safeguards our enemies have put in place to preserve themselves.

We must stop looking at places like Palestine as distant and not effectual to our own situation, as the genocide we see there is exactly what the Zionists intend to unleash upon us.

There but for the grace of God go I.