Yahoo News/YouGov poll: Number of Americans who plan to get vaccinated falls to 42 percent — a new low

So far, most of the conversation about COVID-19 vaccines has focused on the question of whether researchers can develop an effective vaccine in record time.

But maybe we should start asking another question as well: Will enough Americans actually get the vaccine for it to be effective?

“It’s not a vaccine that will save us,” says Harvard Global Health Institute director Ashish Jha. “It’s vaccination.”

For a COVID-19 vaccine to actually stop the pandemic, scientists estimate that at least 60 percent of the population — and probably more like 75 or 80 percent — would need to be vaccinated, a number that depends on many factors, including the efficacy of the vaccine itself and how widely the virus has already spread. 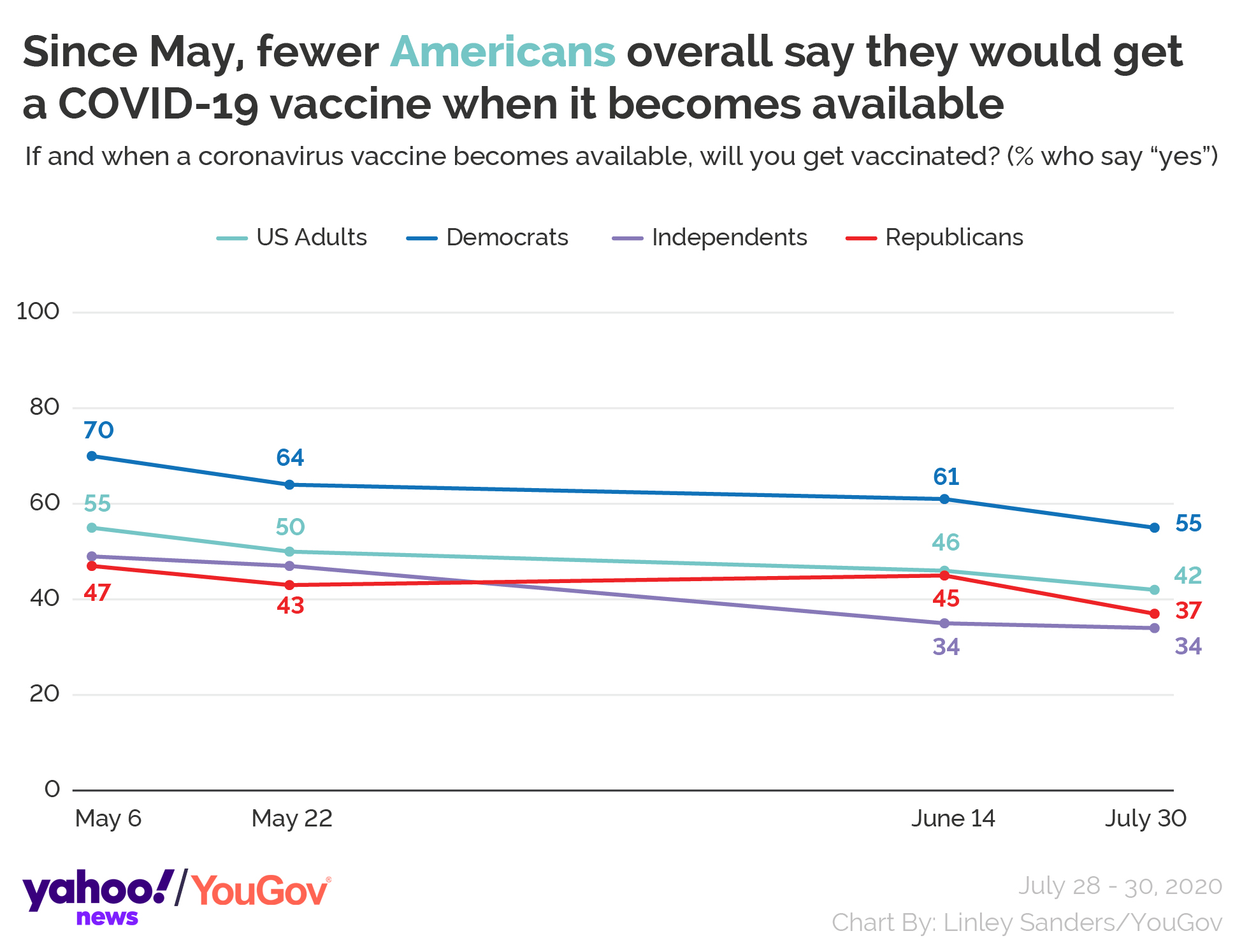 With that in mind, Yahoo News and YouGov have been polling the American people for the past few months: “If and when a coronavirus vaccine becomes available, will you get vaccinated?”

The trend lines have been discouraging.

At first, responses were mostly favorable. In early May, 55 percent of Americans said yes, they would get vaccinated. But that number shrank in each subsequent survey, slipping to 50 percent in late May and 46 percent in early July.

Now the latest Yahoo News/YouGov poll, conducted July 28 to 30, shows that just 42 percent of Americans plan to get vaccinated for COVID-19 — the smallest share to date.

The outlook for universal vaccination is clouded by political considerations from both sides: skepticism about medical authority and expertise on one side (more common among Trump supporters) and suspicions (mostly on the part of Democrats) that the administration is cutting corners on safety to rush a vaccine into production before the election.

Together, these forces threaten to undermine COVID-19 vaccination in the U.S.

Vaccines against different diseases vary in their effectiveness. The efficacy of the measles vaccine is 95 percent to 98 percent, which means that If 100 people who haven’t been exposed to the measles were given that vaccine, 95 to 98 of them wouldn’t get infected (on average). The efficacy of the flu vaccine generally ranges from 40 percent to 60 percent. The more effective a vaccine is, the fewer vaccinated people it takes to stop a pandemic. The reverse is also true — as efficacy falls, coverage must rise.

Last month, the U.S. Food and Drug Administration (FDA) said it would be willing to approve a COVID-19 candidate vaccine with an efficacy of 50 percent. Such a vaccine would help slow the virus’s spread, but it probably wouldn’t extinguish the U.S. epidemic — even if all Americans got vaccinated.

If, say, only 42 percent of Americans got such a vaccine, then many lives still would be saved. As with the flu vaccine, some COVID-19 vaccines may not prevent infection entirely, but they may still prepare a person’s immune system and lessen symptoms, possibly eliminating them entirely. Transmission would be tamped down.

Even so, the pandemic would continue.

Experts are optimistic that the efficacy of whatever COVID-19 vaccines emerge will be higher than 50 percent. They’re also hopeful that uptake — i.e., the percentage of the population that agrees to get vaccinated in the near term — will exceed the 42 percent who already say they’re on board.

There’s good reason for hope. In the Yahoo New/YouGov polls, the number of Americans who say they won’t get vaccinated (between 19 and 25 percent) is lower than the number who say they’re not sure (between 26 to 33 percent). Together, the yeses and the not-sures account for about three-quarters of the population.

Given the unprecedented speed of the current development process — it’s possible that a COVID-19 vaccine could arrive three years faster than any previous vaccine — the public’s anxiety about cutting corners is understandable. Overall, 34 percent of Americans say they are “very concerned” about the safety of “fast-tracked” COVID-19 vaccines, according to the latest Yahoo News/YouGov survey. Another 35 percent say they are somewhat concerned.

“Why should we expect Americans to agree to a vaccine before one is even available?” coronavirus expert Natalie Dean, an assistant professor of biostatistics at the University of Florida, recently wrote in the New York Times. “I’m a vaccine researcher, and even I would place myself in the ‘not sure’ bucket. What we have right now is a collection of animal data, immune response data and safety data based on early trials and from similar vaccines for other diseases. The evidence that would convince me to get a COVID-19 vaccine, or to recommend that my loved ones get vaccinated, does not yet exist.”

Once the large “phase III” or “efficacy” trials that are just getting underway deliver such evidence, the thinking goes, then a lot of not-sures will transform into yeses. And once a vaccine that regulators deem safe and effective is actually widely available — and once people see other people getting vaccinated without incident — then uptake will snowball. A new CBS News poll, for instance, shows that 50 percent of Americans say they will “wait and see” what happens to others before getting vaccinated themselves.

“It seems likely to me that many activities will require a vaccine, including many schools and some employers,” data journalist Nate Silver recently predicted. “If people see a vaccine as a ticket back to normal life, not just for society but also in a more literal way for themselves personally, that could encourage more vaccination.”

Yet there’s also reason to think people could be swayed in the opposite direction — that is, against getting vaccinated.

Just look what happened in the latest Yahoo News/YouGov poll when Americans were asked the same question — “Will you get vaccinated?” — but this time under various (realistic, even likely) conditions.

Would you take a vaccine if it caused side effects such as fever and headaches in one-third of recipients?

Common side effects, in other words, were enough to transform COVID-19 vaccination from something that Americans favored by 15 points to something they opposed by 5.

Would you take a vaccine if it was only 60 percent effective at preventing COVID-19 infection?

Even more people said no in this scenario: 43 percent. Just 34 percent said yes and 23 percent said they were unsure.

Would you take a vaccine if it required multiple doses over a couple of weeks?

This was the most acceptable scenario, with the yeses (39 percent) and the nos (38 percent) evenly divided. Still, those numbers represented a 3-point decline for the yeses and a 11-point increase for the nos.

Would you take a vaccine if it required waiting in line for hours at a time or scheduling an appointment weeks in advance?

Nope — at least not according to 42 percent of Americans. Again, just 39 percent said yes.

Across the board, information about the potential downsides of vaccination — discomfort, inconvenience, less-than-total protection against the virus — reduced the number of people who said they would get vaccinated by several percentage points (3 to 7) while slashing the number who say they were unsure by more (7 to 13).

In all cases, the nos gained ground.

This suggests that Americans are just as ready to reject a potential COVID-19 as embrace it — especially because every one of these conditions is more likely than not to apply. In fact, all of them might apply at once.

Around one-third of the young, healthy people dosed with the COVID-19 vaccine under development by Oxford University and the drug giant AstraZeneca “experienced moderate or severe chills, fatigue, headache, malaise, and/or feverishness.”

One of the other most promising vaccines, from Moderna, seems to require two doses.

Again, the FDA’s efficacy threshold is 50 percent, which is lower than 60 percent.

And it’s hard to imagine how a country that has taken six months to administer 52 million COVID-19 tests will be able to quickly administer 300 million doses of a vaccine — or 600 million, if a booster is required.

As a recent Washington Post report put it, “Deploying the vaccine to people in the United States and around the world will test and strain distribution networks, the supply chain, public trust and global cooperation. It will take months or, more likely, years to reach enough people to make the world safe.”

Given how fragile Americans’ current support for COVID-19 vaccination appears to be — a product, in part, of the tenacious anti-vaccination movement that has taken hold in the U.S. during the past decade or so —trust and cooperation may ultimately make the difference between a successful vaccine and an unsuccessful one.

It’s easy to imagine any number of ways trust could be squandered and cooperation sabotaged — politics and polarization chief among them.

When asked about safety, nearly identical numbers of Republicans, Democrats and independents told Yahoo News and YouGov that they were “very” or “somewhat” concerned: about 70 percent. And even though Democrats tend to be about 20 points more likely than Republicans to say they will get vaccinated, Democratic intent to get the vaccine (down 15 points) has actually fallen more since early May than Republican intent (down 10 points).

Why? Probably because Democrats don’t trust President Trump to keep politics out of the process, considering that he has tied his reelection hopes to the vaccine, and the administration once announced an October (i.e., preelection) deadline for “broad access to the public.”

Meanwhile, only 26 percent of those who intend to vote for Trump say they trust experts such as “the Centers for Disease Control and Prevention and public health authorities” to “judge the risks of vaccines.” Among Joe Biden voters, that number is 68 percent.

With most experts predicting that a vaccine could arrive this winter, in the wake of what’s sure to be a very heated election, almost any misstep could transform it from a possible public health triumph into a politicized disappointment: supply-chain snafus, inequitable distribution, shortcuts on safety, inadequate expectation-setting about otherwise tolerable side effects or imperfections.

It’s a political minefield, and neither party is immune.

To make a COVID-19 vaccine work, Americans of all ideologies will need to get vaccinated. For months, we’ve been talking about the medical side of vaccination — and despite encouraging signs, there’s still no guarantee that a safe, effective vaccine will arrive on schedule.

But even if it does, the latest data suggests another, perhaps more unsettling possibility: that America could get the medicine right and still mess this up.

3 thoughts on “Yahoo News/YouGov poll: Number of Americans who plan to get vaccinated falls to 42 percent — a new low”