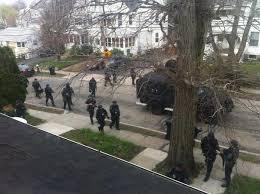 What we seen in Boston is an example of the Federal Government completely absorbing in the state and local government. The police were under Federal orders. The FBI came in and took over jurisdiction of the investigation of the Boston Marathon Bombing. There were Federal armored vehicles all over Boston. This was a Federal operation locking down the city looking for a 19 year old male with a gun. No one was allowed outside the house allowed to freely move. This was a Federal operation what happened on April 19, 2013 just based on the absurdity.

What happened in Boston is the reason why we need our states and local governments to be independent of the Federal government. When a city, county or state government takes federal grant money, they are on the hook. They no longer can self govern. There are strings attached to that money to do certain things to be in compliance to get the funds.  The local government is no longer in control when they accept Federal money. They are now under Federal control.

We have to start confronting our local elected servants and ask questions why they are making deals with the Federal government that violate the rights of the people. Look what happened to New Orleans before Hurricane Katrina came the city. Mayor Ray Nagen had New Orleans federalized. Did it help the city in the aftermath of the storm? No, the Federal government through FEMA made things worse where they were confiscating law abiding guns and blocked relief from entering the city with people in serious need.

Looking at Boston after the bombing at the marathon and how they behaved was a city that was federalized under orders from Homeland security. How they handled the aftermath of the bombing and the investigation was so absurd and over the top. There was no common sense. Putting the city on lock down with law enforcement dressed like storm troopers making threats to people to stay in their homes or face arrest. Police should be ashamed following such orders. If we do not want what happened in Boston to happen in our home towns, than count the cost if they accept Federal money. We no longer can self govern. We need to get the Federal influence out of our local communities.

Two examples in Texas come to mind. When we had the wild fires in Bastrop Texas two years ago raging out of control. FEMA blocked volunteer fire departments from trying to save homes and made things worse for fire fighters trying to contain the blazes. Just recently with the explosion of a Fertilizer plant in West Texas north of Austin. There was no FEMA but first responders converging on the city affected by the explosion to help the injured get medical attention, rescue operations and putting out the fires. All without FEMA’s help.

We do not need the Federal government in our cities, counties and our states. Where they show up. Everything turns to crap. FEMA made things worse in New Orleans; they sure made a show of Security Theater in Boston that made no sense. The city of Boston had the resources to investigate the Bombing on their own without Federal influence.

The recent example what happened in Boston is why we do not need the Federal government’s help in anything. It is time we start realizing how important our states, counties and cites have to be autonomous and independent of Washington DC. Washington is the problem, not the solution.

Do we need the TSA on every street corner or Homeland security with the military patrolling our streets over a non threat or a fabricated enemy? I will take my chances being free than have my right stripped from me in the name of keeping me safe from the Boogeyman.

People in Houston drove out the TSA off the city buses in 2012. This is how we get the Feds out of our communities. We are capable solving our own problems without Washington DC’s help. Do you agree?