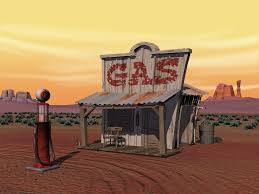 The price of a gallon of gasoline has risen for the past 34 days in a row as we Americans are being fleeced for the last few dollars we have left in our pockets.  It wasn’t that many years ago when the increase in gasoline prices was put forth as being in direct correlation with supply and demand.  When it finally reached the point that we Americans cut back on our gas consumption because we literally could not afford it anymore, the criminal oil cartels realized they had us right where they wanted us.

Back in the 70s, when this brand of extortion was first tried, American nationals quickly became fed up with the situation and started ripping pumps out of the ground in the middle of the night and the gouging stopped forthwith.  But that was back before we became civilized, or rather, institutionalized into the system.  I mean to attack the poor fellow that owns the gas station would just be the wrong thing to do.

We forgot that without the gas pumps, the gas cannot be sold and came to accept that the oil companies siphoning out our crude for $15 per barrel can charge us the world market price for the refined petroleum products.  So, like the candy-asses we have become, we just accepted the situation and allowed our freedom of travel to be diminished through international economic terrorism.

These recent increases in gas prices are completely without any legitimate cause to the effect.  At first they tried to tell us that the increases were due to the changeover to summer gas.  But that wouldn’t sell as there were still too many of us left that actually realize and comprehend that we are still IN THE MIDDLE OF WINTER!

They then went on to change their story to the refineries have to be shut down for maintenance before the switchover to summer gas.  They truly do not give us much credit for any aptitude toward critical thought.  The summer gas contains an additive, so many parts per gallon, which means it is simply dumped into the mix.

The fact is there has been for the past year, and is right now, a glut of crude oil in the United States, and though many of our refineries have been shut down, there is no shortage of supply.

It goes like this.  They got us to accept consuming less gas.  Then they just simply raised the price so that in the end equation, they are actually taking more money from as they give us less gas.  And is that not the new America of the 21st century, less for more, as we march forward toward our ultimate enslavement?  (Because we can’t afford the gas to drive.)

It is now being recommended as a part of our disarmament that would-be rape victims puke as a defensive measure to ward off the attack.  I hereby suggest and advocate that each time we buy gas, when the attendant comes up to the window, or when we go to the counter to make payment, we puke all over the person raping us.

6 thoughts on “Gas Price Gouging has become the Status Quo”