Ironic: Obama Wants ‘Penalties On Anyone Who Buys A Gun As Part Of A Scheme To Arm Criminals’ 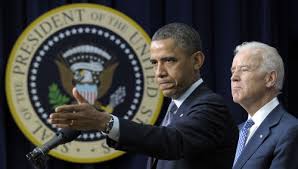 Despite his attorney general being in contempt of Congress regarding a gun-running operation that provided guns to drug dealers, Pres. Obama says he wants to “impose serious penalties” on people who do just that.

Calling for a vote on gun control measures, Obama said Thursday the laws were needed to punish any “scheme to arm criminals“:

“Now the full Senate and the House need to vote on this bill, as well as the measures advanced in the past week that would impose serious penalties on anyone who buys a gun as part of a scheme to arm criminals, improve school safety, and help keep guns out of the hands of criminals, people with a severe mental illness, and others who shouldn’t have them. ”

Ironically, the White House’s refusal to release communications related to the Fast and Furious gun-walking program and the refusal of a White House official to be interviewed about the matter “made it impossible” for the inspector general (IG) of the Justice Department to “pursue that aspect of the case,” IG Michael Horowitz, testified last year.

And, Obama’s attorney general, Eric Holder, became the first Cabinet member to be held in contempt of Congress last June in a rebuke pushed by congressmen seeking to unearth the facts behind the bungled gun-tracking operation.

Operation Fast and Furious was run by the ATF (Bureau of Alcohol, Tobacco, Firearms and Explosives), which is overseen by the Department of Justice, headed by Attorney General Eric Holder. The program, which ran from the fall of 2009 to mid-December 2010, allowed guns to “walk” into the hands of Mexican drug cartels through straw purchasers.

2 thoughts on “Ironic: Obama Wants ‘Penalties On Anyone Who Buys A Gun As Part Of A Scheme To Arm Criminals’”