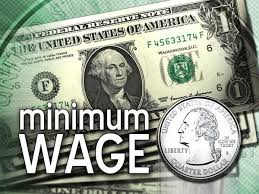 The insurgent Obama’s administration is proposing a raise in the minimum wage as a reward to the millions of illegals working US jobs and not paying taxes.  This is the proverbial lipstick on the pig.  According to the communists own figures, 60% of the four million jobs moved out of our country in the last four years, were paying a medium wage and 48% of the two million jobs created during the same time period are low paying jobs, many of which, as previously mentioned, have been given to illegals while 80 million Americans remain unemployed.

So what will be the net effect of a raise in the national minimum wage? A majority of this new wealth will go to illegals and the action will hurt small businesses, while the big corporations, through their international franchises will simply defer their increased labor costs directly back upon the entire population through higher prices for goods.

In all honesty, no US national should be living under the poverty level, simply as a consequence of their ownership in this country and its resources.  Every American national who chooses to be an entrepreneur should have a business if he or she possesses the aptitude and drive to run one.  This being said, take note: a part of the communist push we are seeing right now is to bring entrepreneurs from other countries into the United States, I guess with the idea being that American nationals will have to be content with working for foreigners for a poverty level minimum wage.

Well at least it would seem the scraps from our country’s wealth, that the international elite are offering us, are to be just a little bit more, that is the little bit we will get that is not being scooped up by the foreigners illegally in our country.

Now they will be further replacing our $30/hour manufacturing jobs with $9/hour service jobs to be worked by the Chinese and Mexicans and that is a really good deal for us.

5 thoughts on “Minimum Wage Hike – Oh Goody, for Somebody”