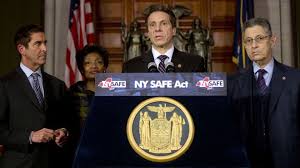 ALBANY, N.Y. — New York sought to combat violence by rushing the nation’s toughest gun control measure into law after the Connecticut school shootings that killed 26 people, but the state is now carving out an exemption to make sure movie and TV producers can stage running gun battles on Manhattan streets.

Movie and TV productions have long been courted by New York and other states with tax breaks in exchange for the jobs and glamour of the industry. Hollywood is also a major campaign fundraising stop for New York politicians.

“We spend a lot of money in the state bringing movie production here, post-production here, so obviously we would want to facilitate that,” said Gov. Andrew Cuomo, who wants to expand the film and TV tax credit.

He said movies and TV may use fake guns that wouldn’t be subject to the new law but the industry wants “certainty.” The revised law would allow them to use real weapons without real ammunition.

“There’s no reason not to make a change like that to give an industry comfort, especially when it’s an industry we want to do business in the state,” the governor said.

Film and television producers have spent more than $7 billion in New York since the state began offering tax breaks in 2004, the governor’s office says. New York has been the stage for recent films including “Spider-Man 3,” “The Nanny Diaries,” “Sex and the City 2,” and “The Sorcerer’s Apprentice.” Most of Woody Allen’s films are made in New York City, and many TV shows including “Louie” turn to the city for their backdrop.

The Hollywood exemption is just one of the revisions planned for the state law that was passed in January before the Obama administration and other states offered their legislative responses to the Dec. 14 rampage in Newtown, Conn. Other changes to the New York law would allow police officers to keep their high-capacity handguns and take a loaded gun on school grounds without permission from school officials.

However, the need for a “cleanup” bill also means the fight over the law may not be over after all.

An estimated 10,000 opponents of the new law are expected to descend on Albany on Thursday to try to persuade lawmakers to take advantage of an unexpected second shot at the law critics claim is unconstitutional.

The law was passed in a flurry of closed-door negotiations, without public hearings or a three-day review required of bills under the state constitution. The measure was debated, passed and signed within hours, just days before President Barack Obama proposed his measures including tougher gun control.

“Had they not rushed this bill through, this bill would never have become law,” said Assembly Republican leader Brian Kolb. “This opposition would have been mobilized … this bill would do nothing to prevent the tragedies.”

Most opponents have rallied around a call for repeal of the law, which would be impossible to pass through the Assembly led by New York City Democrats who have long championed gun control measures. But the cleanup bill provides an opportunity for lawmakers to submit more substantive changes.

Others are considering a strategy of blocking the bill from passage, which could bolster the chances of a pending lawsuit that seeks to overturn the law.

Therapists, doctors and other mental health professionals will be required to tell state authorities if a patient threatens to use a gun illegally. Mental health advocates are also seeking amendments to the law they say may interfere with treatment of potentially dangerous people and discourage them from seeking help.

Cuomo and Sen. Jeffrey Klein, who co-sponsored the gun control legislation, said he and legislators are only discussing technical changes at this time.