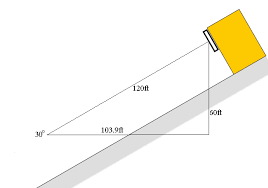 I asked my former Marine son Daniel if the Marine Corps taught him to shoot uphill.  He has in fact shot at ranges with elevations before, but mostly there was little formal instruction, even for designated marksmen like he was (other than things like Kentucky Windage type adjustments).  I suppose that Scout Snipers go through some sort of training on shooting up or down elevations, but most Marines do not.  I have also talked with our reader Jean (who commanded troops in N2K), and there was no particular training for Soldiers to teach them how to target Taliban up a hill.

Daniel also tells me that in his opinion there are more important things for Marines to learn.  If we’re targeting enemy fighters up a hill at 300 meters and beyond, we’re doing the wrong things the wrong way.  In his opinion, even though he scored at the very top of his Battalion every year he qualified, his time at ranges all over America did little good for him.  In his opinion we ought to be training Marines more on their run and drop drills (e.g., squad rushes), their development of enfilade fires, the use of combined arms, and especially bounding drills and movement to contact for small unit maneuver warfare (and for urban combat, satellite patrols and room clearing).  If the enemy is in the mountains, it makes little sense to shoot at them from 400+ meters.  Go and fetch them out of the mountains.

But for us, planning on potential end of America scenarios, we don’t have combined arms, and we don’t have access to fire teams, squads and platoons of fighters.  It might be more important for us to know how to do things like shoot uphill or downhill.  Many good shooters already know all of this, but some do not.  I don’t propose that the Taliban, those backward, pagan, culture-less, woman abusing pedophiles, know Newton’s laws, but it’s possible that they learned their downhill shooting by trial and error.  We can do better because we understand trigonometry and Newton.

My iPhone (turned sideways) has virtually all of the mathematical functions of most calculators, including the trigonometric functions.  If you happen to have a range finder and iPhone with you, you’re set.  If you need more rudimentary fixup, there are some helpful rules of thumb.  That’s all assuming that you have ammunition with which to practice.